Lonely Planet calls Eger “a jewelry box of a town” and it is certainly a town loaded with things to do. It has thermal baths, fantastic restaurants, wine tasting, a gorgeous basilica, an Ottoman minaret (that you can climb) and an awesome hilltop castle, which is going to be my primary focus of this blog post. One of our favorite parts of Eger, Dobó Tér (Dobó Square), was unfortunately closed for renovations last summer, but I’ve heard that it is back in order and better than ever so we’ll have to go back and visit on our next trip. 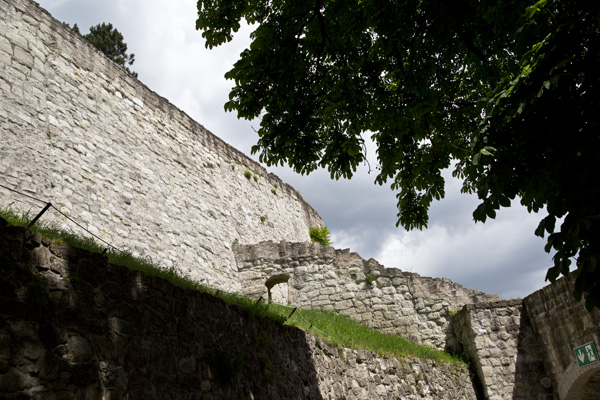 It was a fairly stormy day, so the clouds looked a bit ominous. 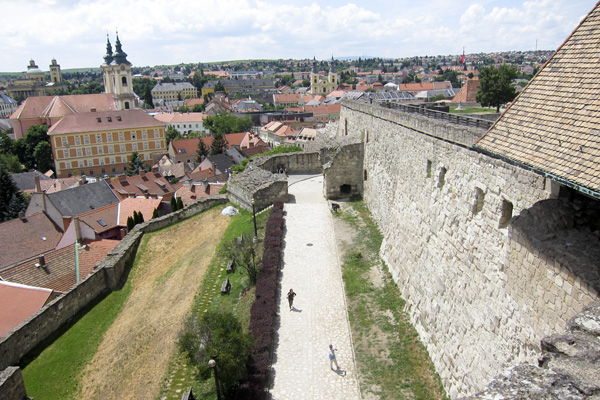 View from the Egri Vár 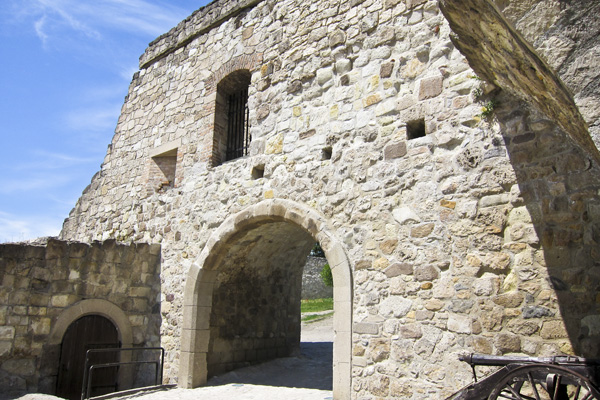 The main entrance to the castle

Back to the castle… Egri Vár (Eger Castle) is only a short walk from the city center and it is a great stop for people of all ages. 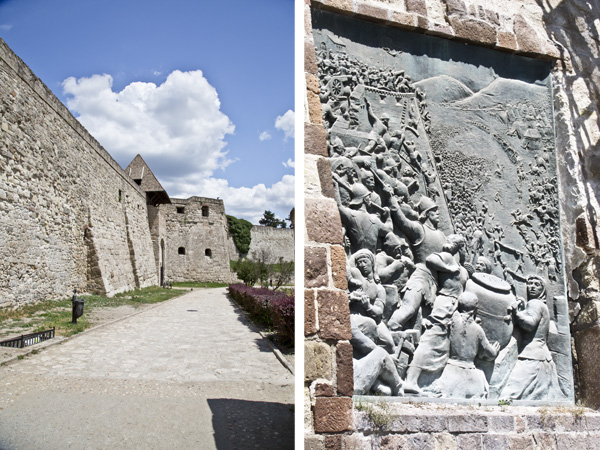 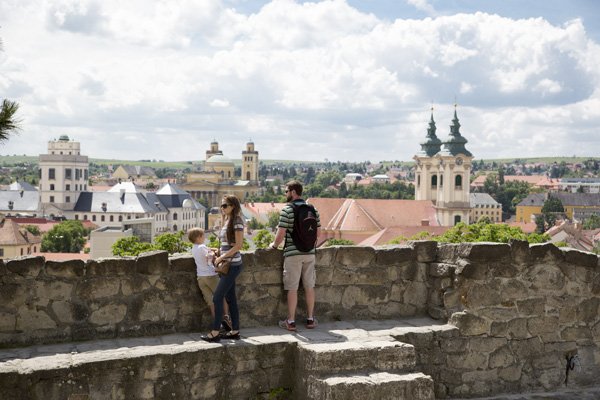 Walking the perimeter of the castle. 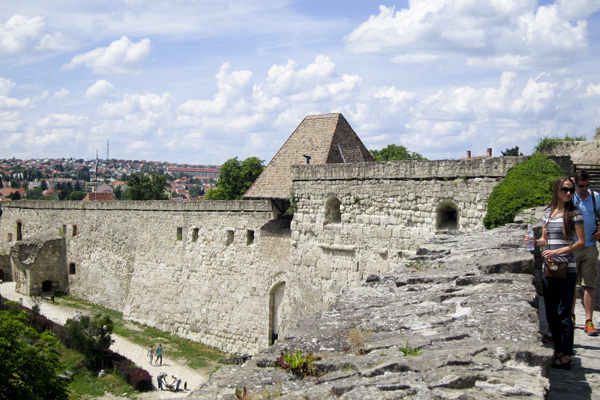 Looking down toward the main entrance 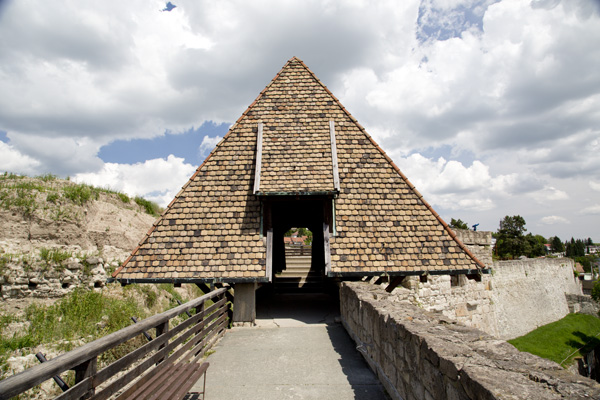 The top of the gatehouse

The castle is most famous for its 1552 defense in which approximately 2000 Hungarian soldiers led by Dobó István withstood a five week siege by Turkish forces that numbered between 35,000 and 40,000. The Turks, however, invaded again, this time successfully, in 1596. The Turkish minaret, which was erected at the end of the 17th century, is a reminder of this time and served as a marker of the northernmost part of the Ottoman Empire. The rule of the Turks in Eger was brought to an end in 1687 when it was starved into surrender by the Hapsburg backed army led by Charles of Lorraine. 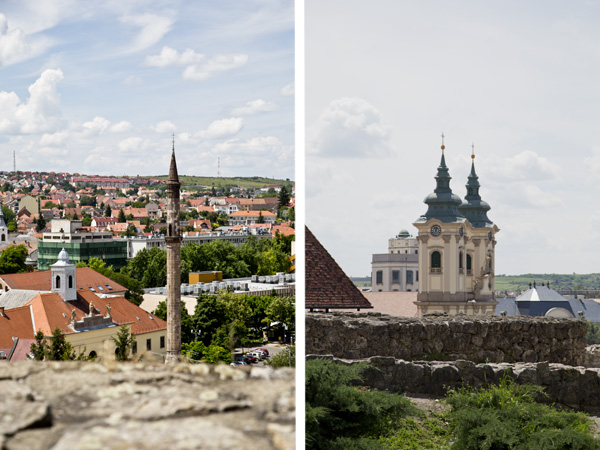 Castle views of the Turkish minaret and the Minorite Church 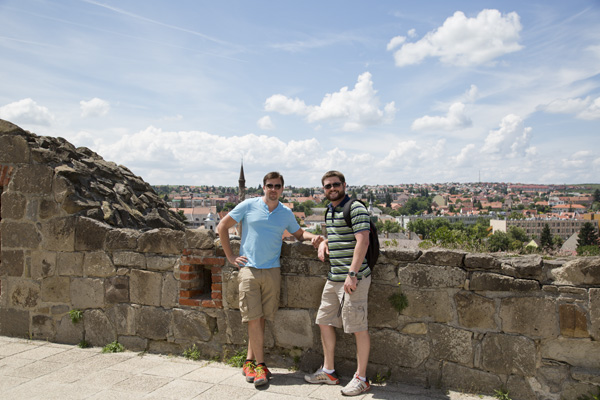 David and Mat with the minaret behind them 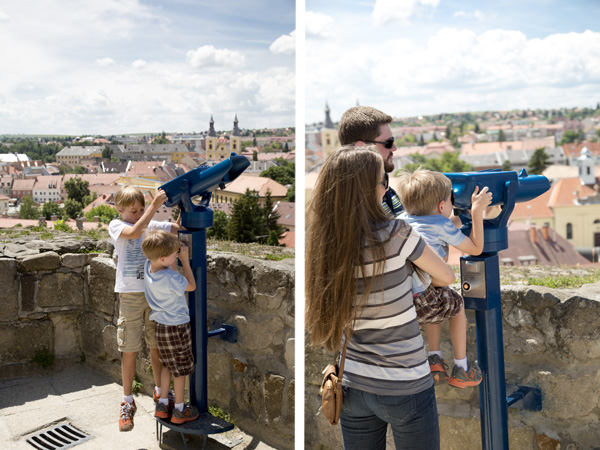 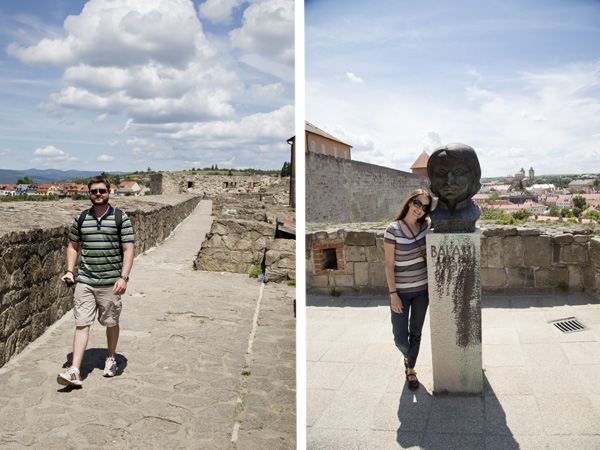 Mat along the castle walls and me posing next to the statue of famed Hungarian poet, Balassi Bálint, who was also the nephew of Dobó István 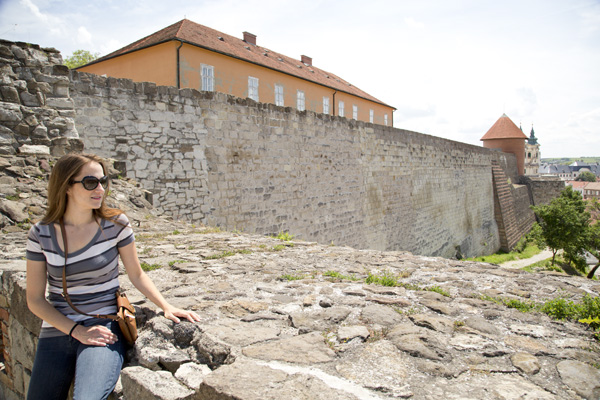 This is me enjoying the view 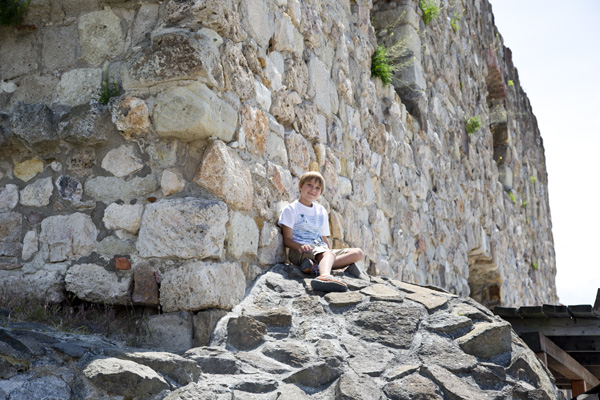 Big guy had to scale the walls 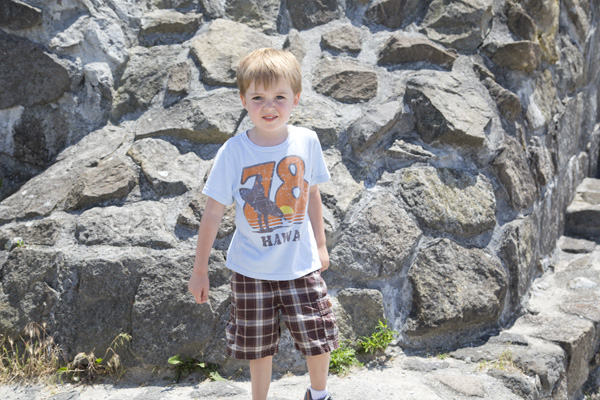 While Little Man was perfectly content to hang out below 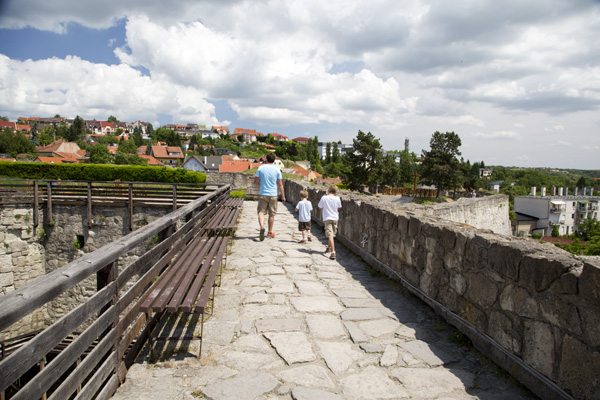 My guys walking along the interior walls 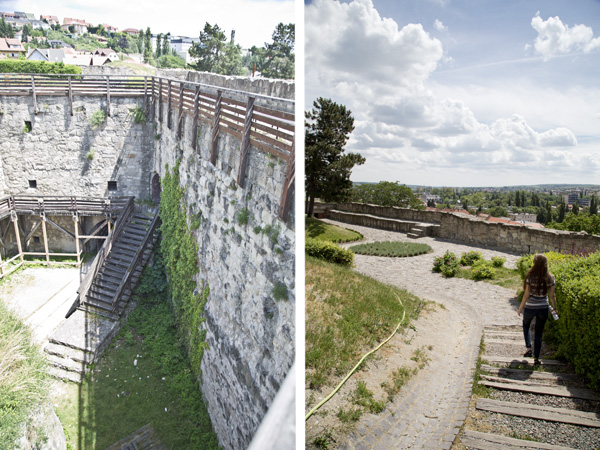 All of the castle is fun to tour, but the boys were especially interested in the Panoptikum which is a wax museum depicting costumes and weapons throughout Eger’s history and the newly built (at least since we had been there last) play area. The castle also has a highly recommended Kazamaták which is a tour of the tunnel system under the castle. Of course, as always, the castle exteriors and views were my favorite part of the tour and since we were there just after it rained (with more rain on the way) the view was crystal clear and everything smelled absolutely divine! 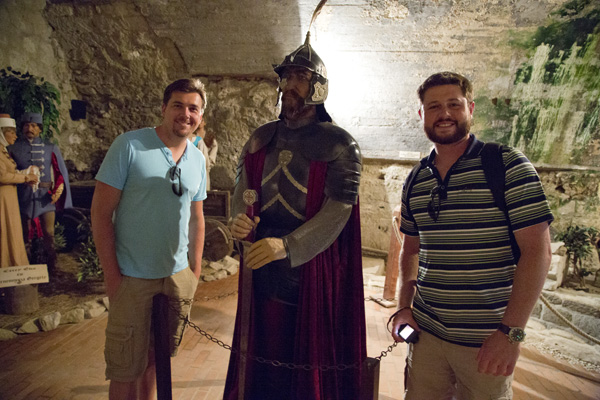 Inside the wax museum 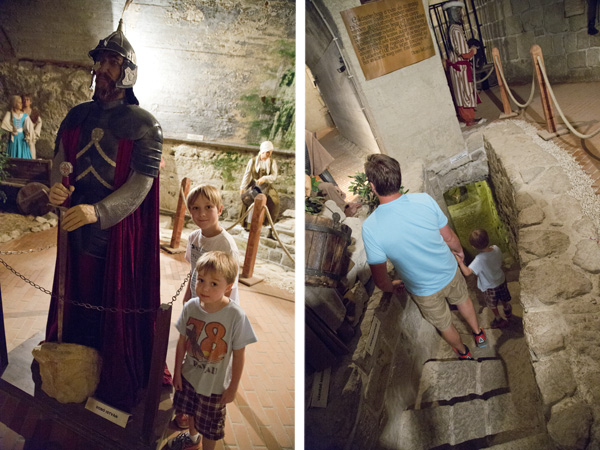 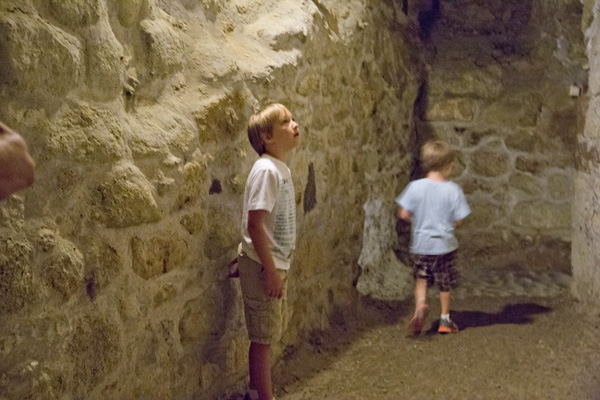 Big Guy was fascinated with the stone walls 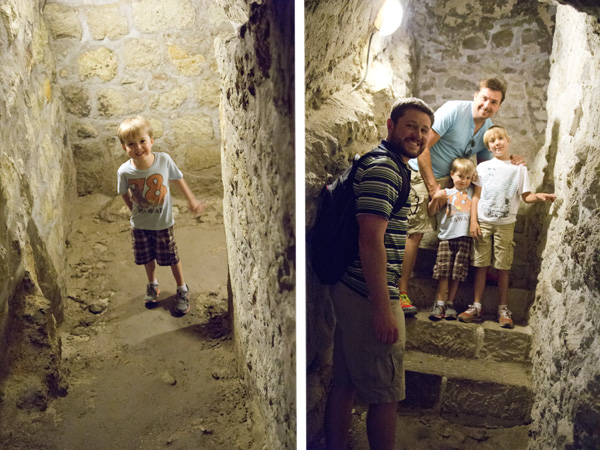 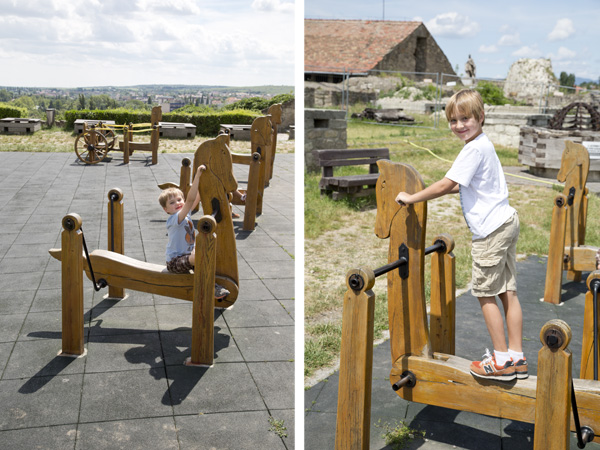 Back above ground in the play area. How cool are those horses and where can I get one?

Oh, and we couldn’t possibly leave a castle in Hungary without the boys climbing all over some cannons or pretending to be locked up in the stocks. 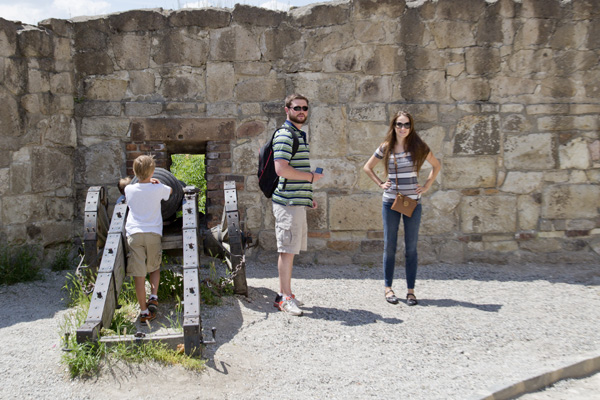 Large cannon next to the entrance 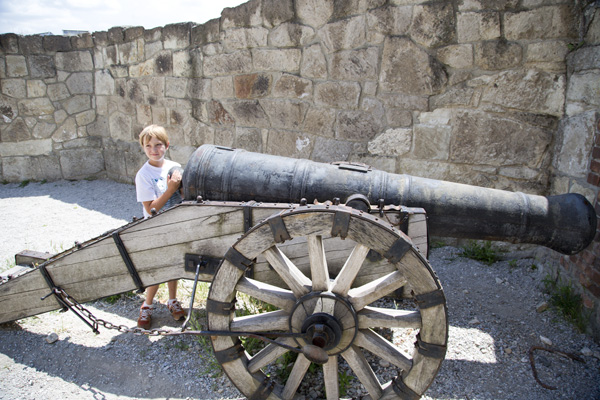 Pretending to fire the cannon 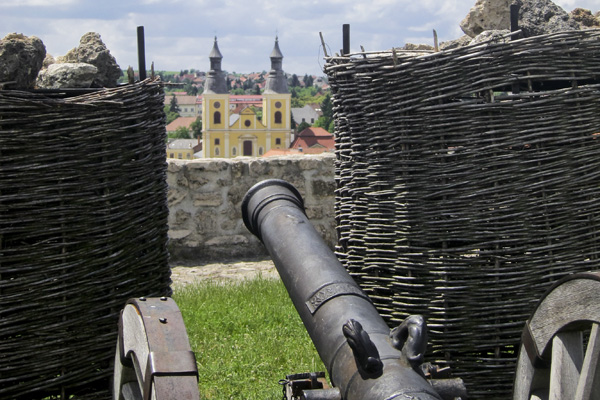 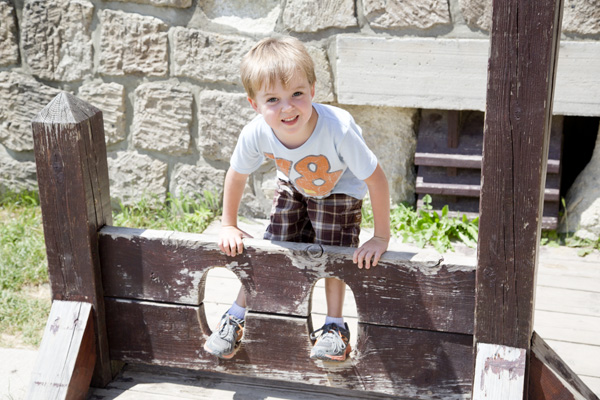 Getting locked up in the stocks.