Happy Monday! Flashing back to our European adventure, I now take you to our favorite part of our trip: Dédi’s house. Dédi lives in northeastern Hungary, not far from the Slovakia border, which is my absolute favorite part of Hungary. The countryside is gorgeous with rolling hills, sprawling grasslands and fields as far as the eye can see. To David this area is one thing: home. Traveling to northeastern Hungary for him is akin to me traveling back to Colorado. He may no longer live there (and hasn’t for decades) but it will always welcome him back with open arms. 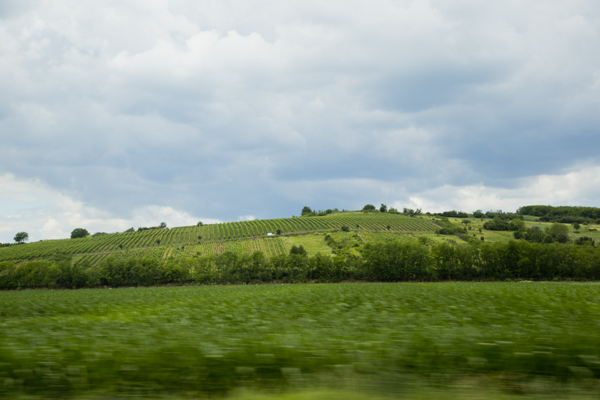 This is the view when driving into Dédi’s village. Isn’t it stunning?

When we got off of the highway at Miskolc and turned toward Dédi’s village, you could feel a shift in David’s whole demeanor. As we passed each village on the main road we would tell the boys, “four more villages to Dédi’s house…. Three more…. Two more…” They were so excited they could hardly stand it. The anticipation was nearly too much to take. And then, before long, we were there. We had finally arrived and, just like David, we all felt like we had made it home. 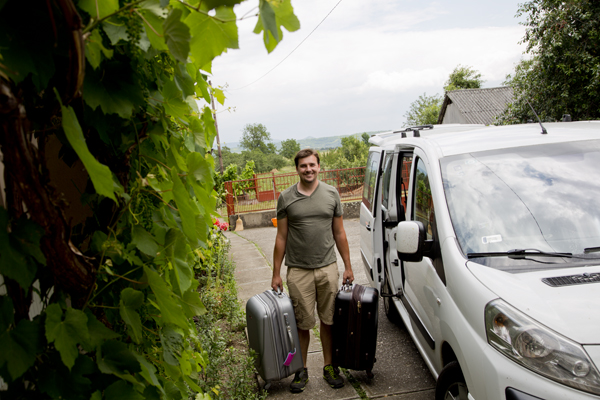 Look at that face! Pure joy! 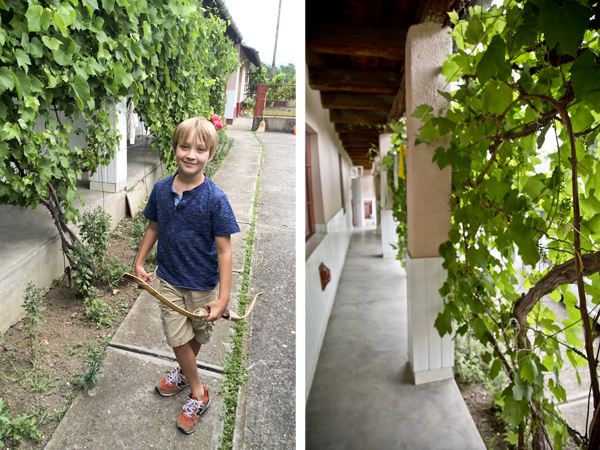 Big guy exploring Dédi’s house and the grapevines along the rear peasant-style house. 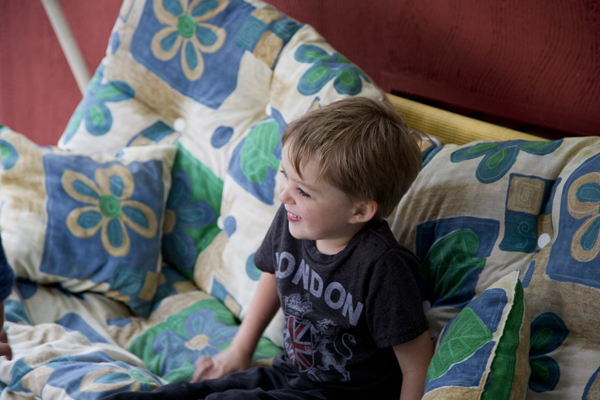 Dédi’s house is nothing short of magical and I do not use that term lightly. It may not be a sprawling mansion or have every modern day convenience, but it is filled with the one thing that money cannot buy: Love. The home is so filled with love, it is actually overflowing. Dédi took the little guys and Mat on a quick tour of the house showing them where Nagyi and Tete (David’s parents) lived when they were first married, where David and his cousin Kori used to climb trees and search for frogs and where their great grandfather used to feed the pigs. Each piece of furniture, all of the embroidered linens and every memento, they all have a story and we love to hear Dédi tell about all of them. We walked all along the property through Dédi’s sprawling vegetable garden and through her fruit trees. The boys were beyond fascinated with the old pigsty, chicken coop and outhouse. 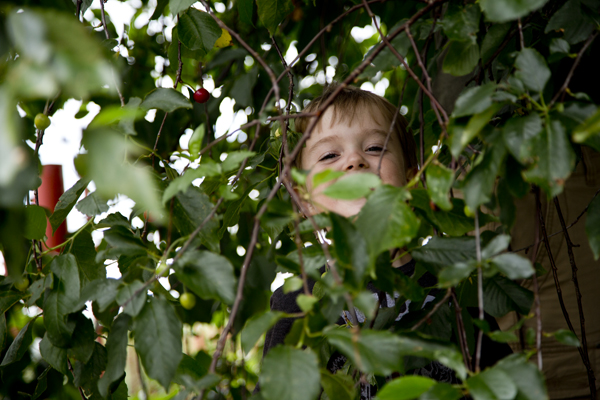 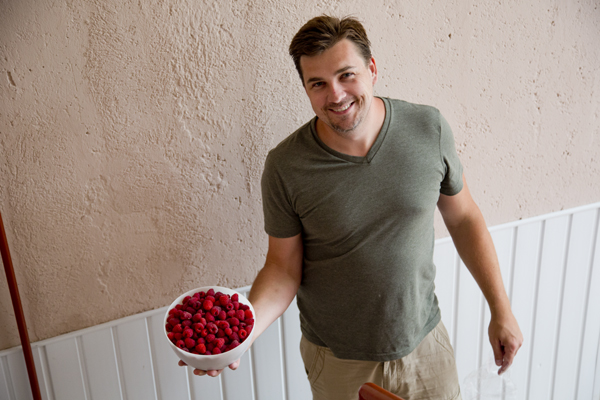 David with the large bowl of raspberries that awaited our arrival 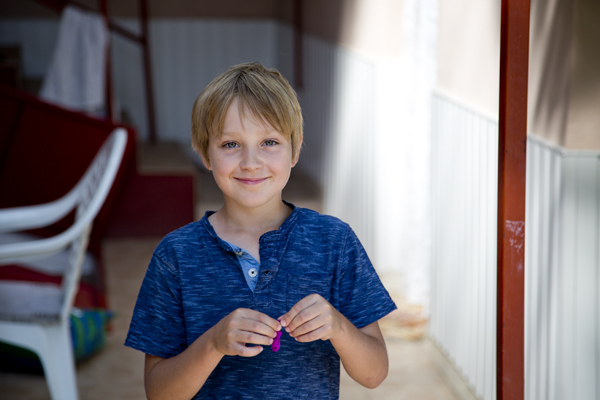 Big Guy standing outside of the summer kitchen.

As we reminisced, Dédi helped with our laundry and they boys were excited that we got to dry it the “old fashioned way” on a clothesline. Of course as soon as we had the clothes drying on the line, the rainclouds started moving in and we had to move our clothes in under the eaves that are sheltered by Dédi’s grape vines. We got everything moved just in time and as the rain trickled down outside, we sat in Dédi’s big summer kitchen and had a delicious meal followed by all of our favorite desserts. I guess I should clarify what I mean by summer kitchen. Dédi has a small kitchen in the main front house and a larger kitchen in the back of the house in what was the original peasant-style house. The main house was build much later and has a more modern layout that is conducive to a more modern lifestyle. The original house, which is very common in that part of Hungary, is made up of a long building that is broken into sections. The front part of this building is usually a large kitchen area, the middle is an apartment living area that is generally broken into sleeping quarters and a sitting area and the back is a garage (it was most likely a barn/stable in its original incarnation). This layout would have been extremely practical when the houses were originally built, but they aren’t particularly favorable for modern day lifestyles. Today, the area of the old peasant style house that gets the most use is the kitchen because it is large enough to fit a lot of people and it is the perfect place to host visitors (and Dédi gets a lot of visitors). 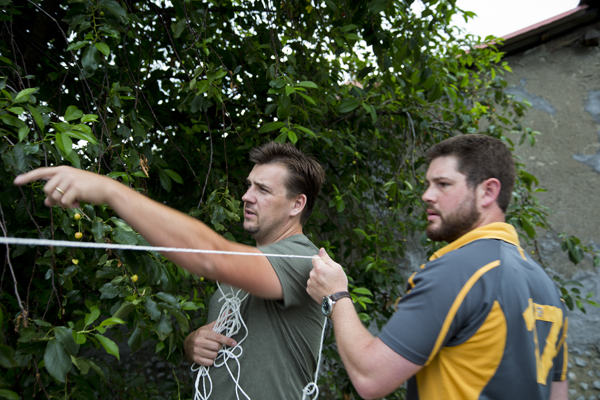 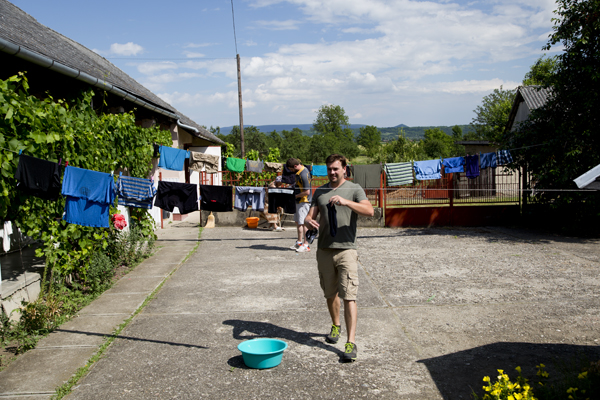 Hanging the clothes out to dry. 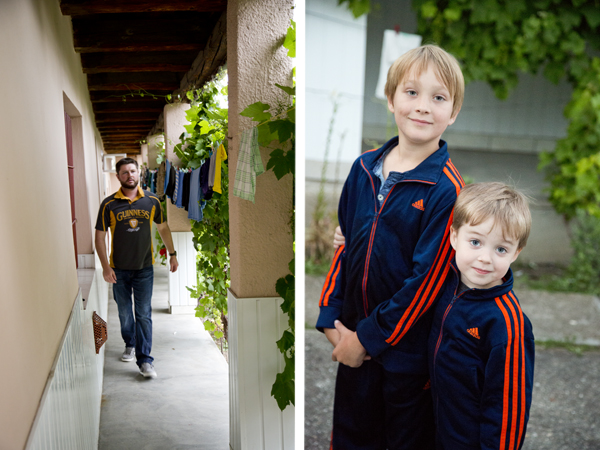 Moving the clothes under the eaves. The boys in their matching track suits. 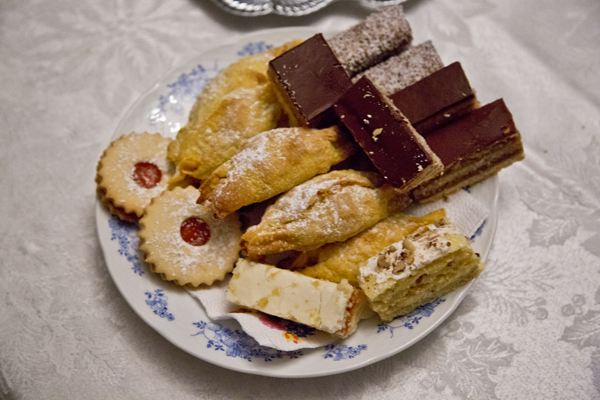 All of the baked goodies.

The following morning we accompanied Dédi to a church service at the village church that is just a short walk from her house. I love this church because so much of David’s family history is rooted there from weddings to christenings and even funerals. It is the church where David was an altar boy and where he and his cousin Kori used to get in trouble for giggling during the mass. The old priest, of whom I was so fond, sadly passed away since we visited last and there is a new priest that has taken his place. Traditionally, the young children would sit in the front of the chapel, the women would fill the back of the church and the men would all sit up in the balcony by the organ but as village life has changed and evolved, so has the seating arrangements of the church with most people intermixed in the main chapel and few people climbing up into the balcony. Dédi has her favorite pew that she likes to sit in and she was very proud to have our whole group with her on this particular Sunday. She usually goes to the early mass, but we had slept in and woke up with just enough time to make it to the late mass. 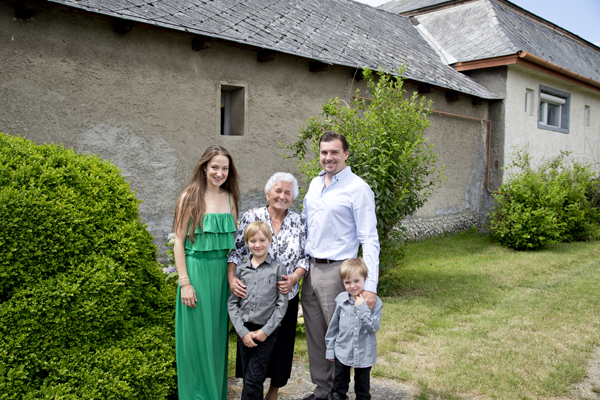 Posing before heading off to mass. 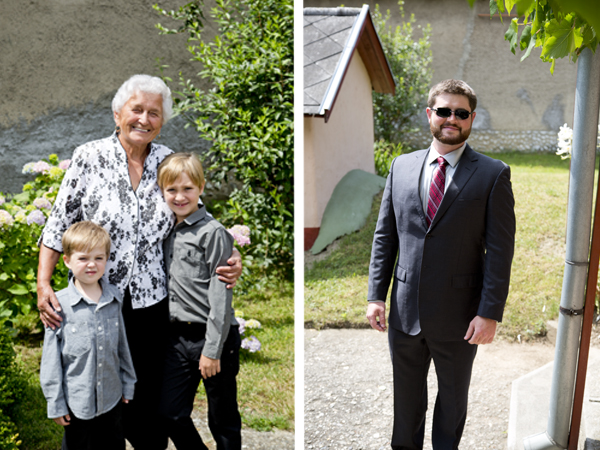 Dédi and her boys and Mat looking like a Secret Service agent. 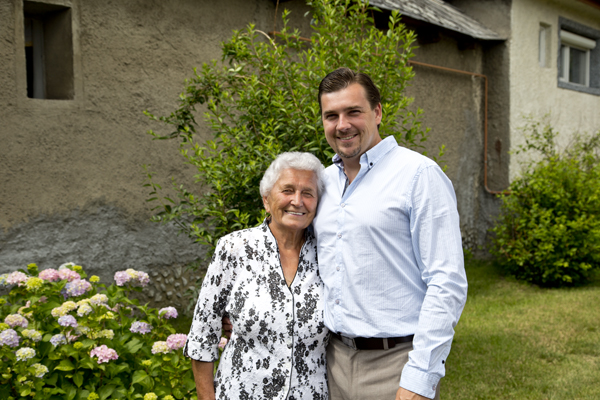 Seriously… can’t you just feel the love in this picture?

I didn’t take any pictures of the interior of the church on this trip, but here are some shots from our last trip to Hungary that will give you an idea: 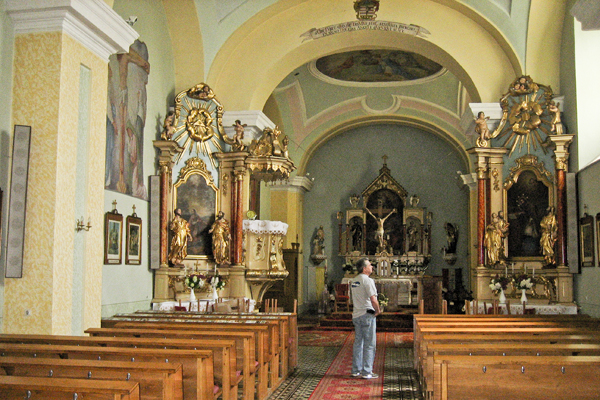 The front of the church and the altar (that’s my dad, who was with us on the last trip) 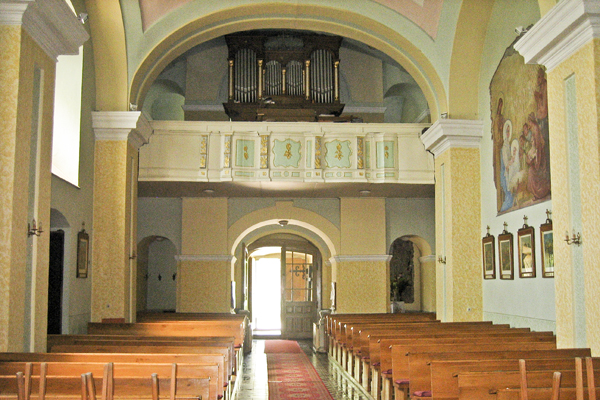 The rear of the church and the organ. 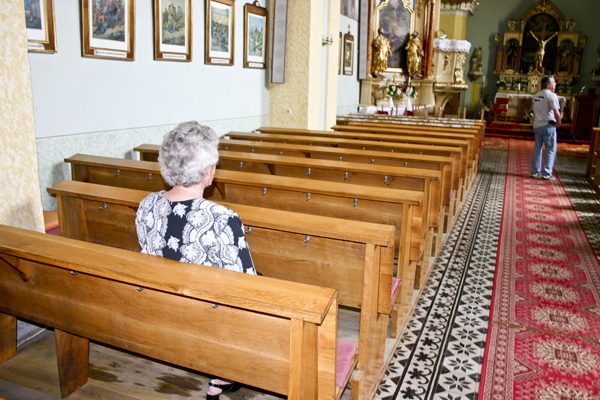 Dédi showing us her special pew. 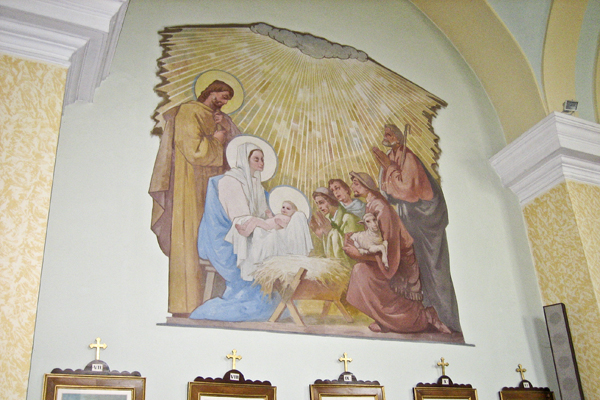 Anyway, I have to get to work but I’ll have more of the trip tomorrow. I hope you’re having a great start to your week!