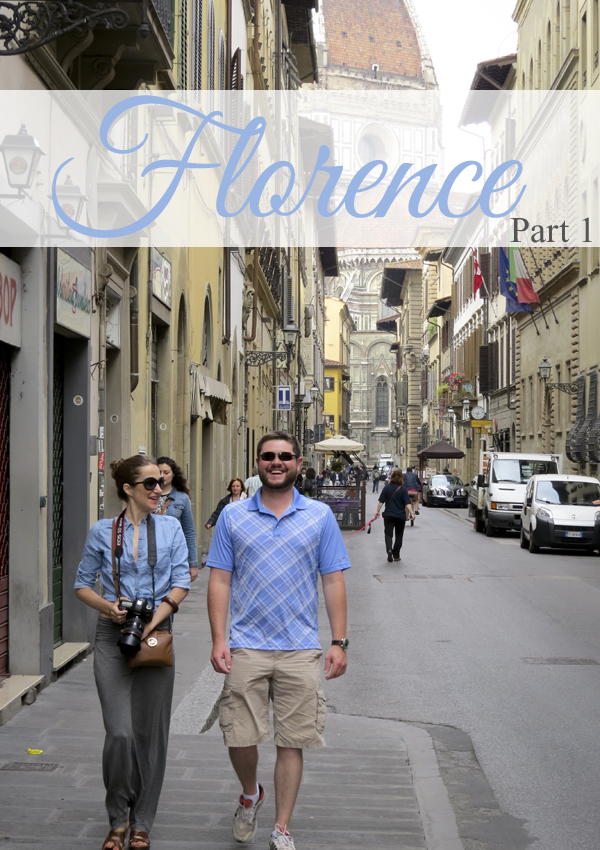 Florence, or Firenze if you’re Italian (or Hungarian for that matter), is often considered to be the birthplace of the Renaissance. It just so happens that it is also my favorite of the big Italian cities (that we visited anyway). I’m not even sure where to begin. I have wanted to visit Florence since I first saw While You Were Sleeping

. In the film, Sandra Bullock’s character says that if she could go anywhere in the world, it would be Florence and the more I learned about it, the more I wanted to visit Florence as well. I was not disappointed (except that we didn’t get to stay longer). We took hundreds of photos of the Duomo alone so narrowing down which to share with you has been a bit daunting to say the least. Two days was not enough time in Florence, but I don’t know that two months would have been enough time either. Every corner you turn reveals something new and exciting. There are far too many pictures for one post so I’ve split them into a few. Today I’ll start with food and accommodations.

David is the king of hotel accommodations and our hotel in Florence was no exception. We stayed at Palazzo dei Ciompi which is located in Piazza dei Ciompi in Florence’s Centro Storico. The hotel is literally just a few blocks from Piazza del Duomo so it is in a prime location. Just outside of the hotel stands Vasari’s Loggia del Pesce and beyond that is the Piazza dei Ciompi Flea Market. The market is open daily and while the stalls are a bit run down it almost adds to their appeal. The shop keepers are also very friendly and even attempting to speak Italian will endear you to them. David, Mat and I spent a good deal of time perusing the little shops but unfortunately we didn’t come away with anything as everything we wanted was either too large, too breakable or too heavy to return in our suitcases. 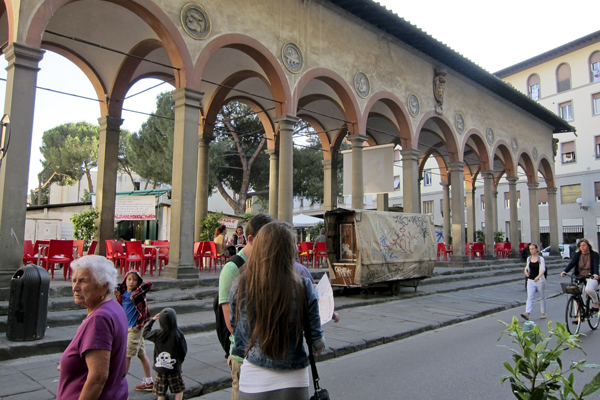 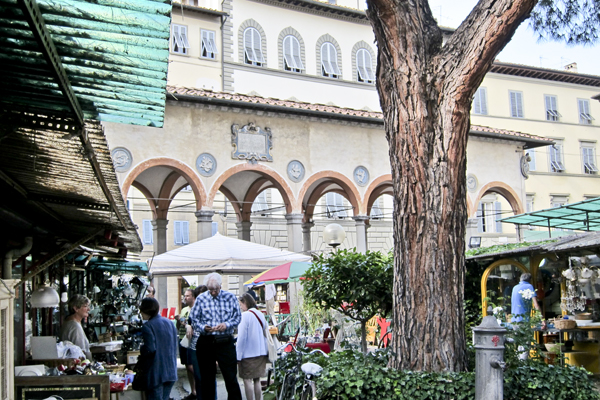 Piazza dei Ciompi Flea Market looking back toward our hotel.

Our hotel suite was huge. I was expecting a small suite with tiny rooms but was greeted with a sprawling apartment that was much larger than my first apartment (like at least three times the size). We had three bedrooms , two bathrooms, a living room/dining room (that also had two sleeper sofas), an eat-in kitchen and a large storage room. Dédi loved it and even made us dinner in the kitchen our first night in Florence. 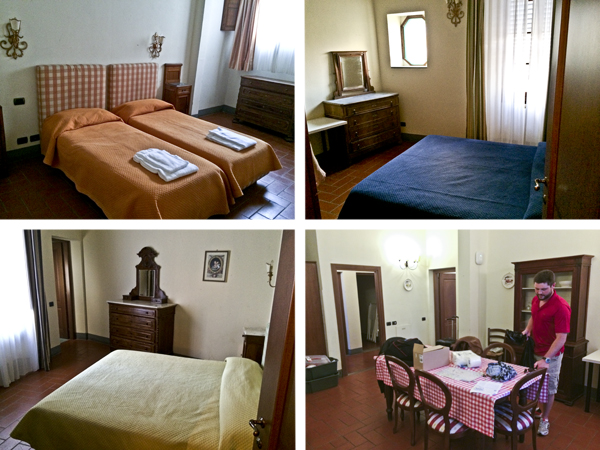 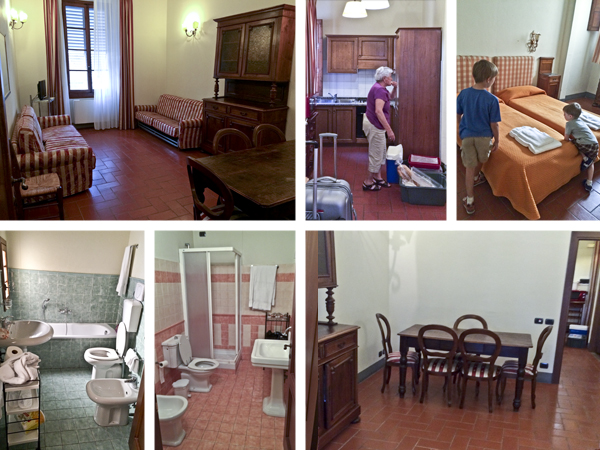 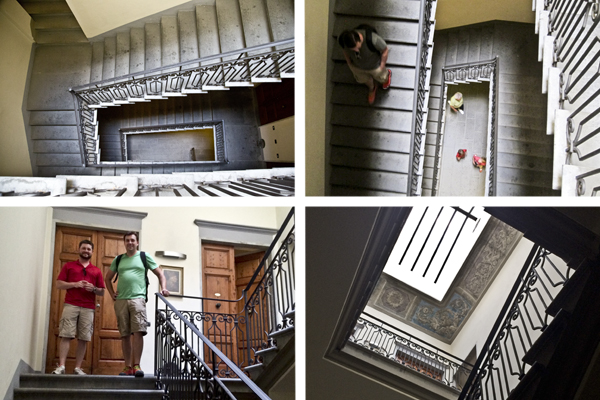 Even the stairwell was cool.

As far as food is concerned, I don’t think we had one bad meal in Italy. The little restaurant attached to our hotel was great for pizza and snacks so we ended up eating there a lot. Our favorite restaurant in Florence was Trattoria Vecchio Mercato which is located in the heart of the San Lorenzo district. We enjoyed our lunch on the terrace (because it was far too hot to eat inside) and had the pleasure of being serenated by a troupe of street musicians. The food was excellent and we had the most charming waiter who advised us on everything from souvenir and antique shopping to where to find the best gelato in the city (more on that in a bit). 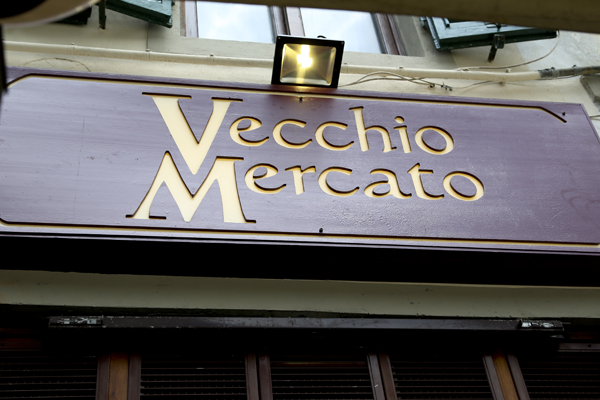 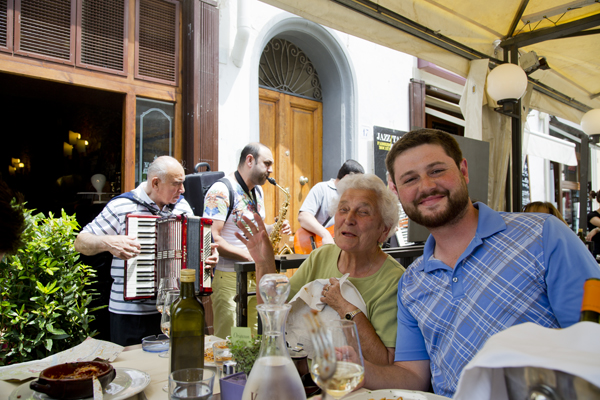 Dédi and Mat enjoying the music. 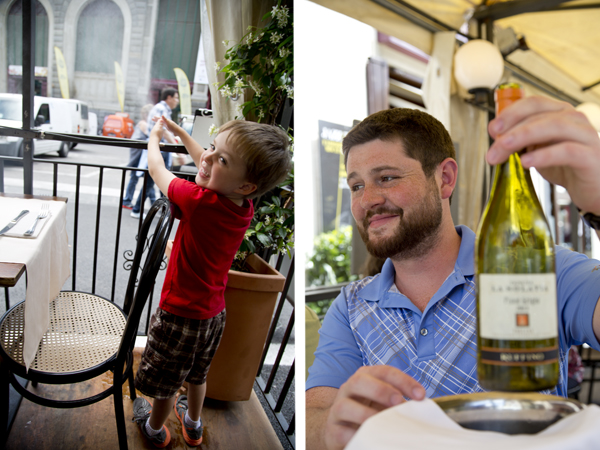 Little man getting his hands wet in the misters and Mat getting ready to pour some wine.

We enjoyed breakfast at an adorable little café and bakery called Caffe Pasticeria La Loggia Degli Albizi where they had delicious cappuccinos and delightful little pastries. We had cappuccinos every morning for breakfast because in Italy cappuccino is a breakfast only drink and Italians strongly look down on having it after eleven o’clock. In almost all Italian coffee shops the patrons crowd around and drink their coffee while standing at the bar, leaving virtually all of the tables are empty. This is because in Italy there is a price for coffee at the bar and another for coffee at a table. The table price is much higher and as a result there are not a bunch of guys hanging out and taking up whole café tables while surfing the internet on their laptops. We did pay extra to sit at the table at Caffe Pasticeria La Loggia Degli Albizi because it was busy and made for great people watching (plus, I’m not good with crowds). 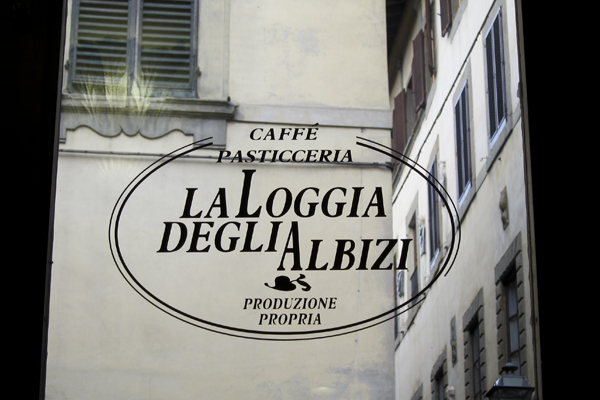 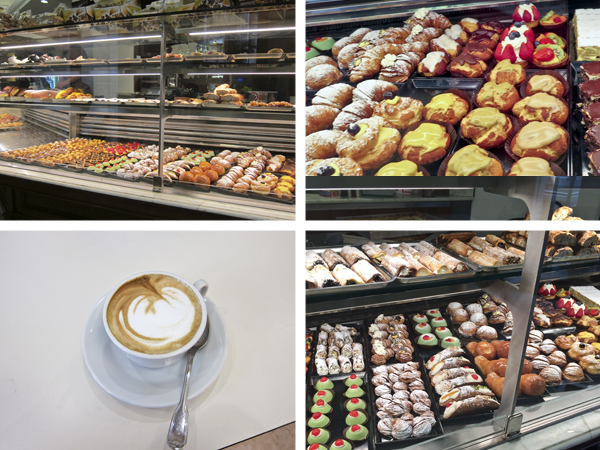 The pastries and cappuccinos were delicious! 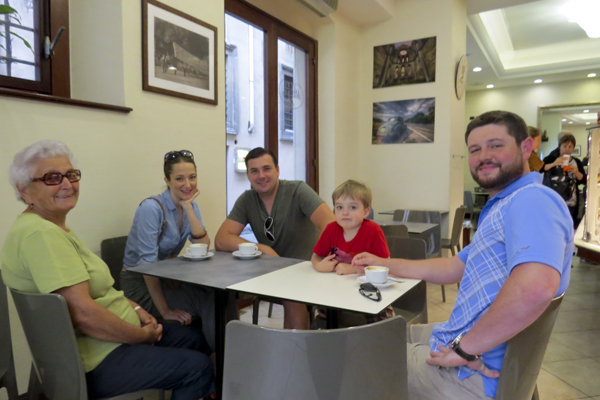 Enjoying our breakfast at a little table in the corner.

The boys (big and small) all agreed that one of the best foods in Italy is Gelato and we spent a great deal of times hunting down gelaterias. Some were good, some were great and all were worth trying. We knew some gelato basics before arriving in Italy like you should never get the stuff that is piled sky high because it is full of fillers and binders and only made to look pretty for the tourists. It is far inferior to true Italian gelato. Also, never go for the bright colors not found in nature because it is probably filled with artificial colors and ingredients. Real Italian Gelato is fresh, natural and absolutely divine. These were our three favorite places for gelato in Florence:

Amalo: This was right by the hotel and I must say it was the cutest of the gelato shops we went inside. It was okay, but there was nothing that stood out about their gelato but they were extremely friendly and since they were so close to our hotel they were very convenient. 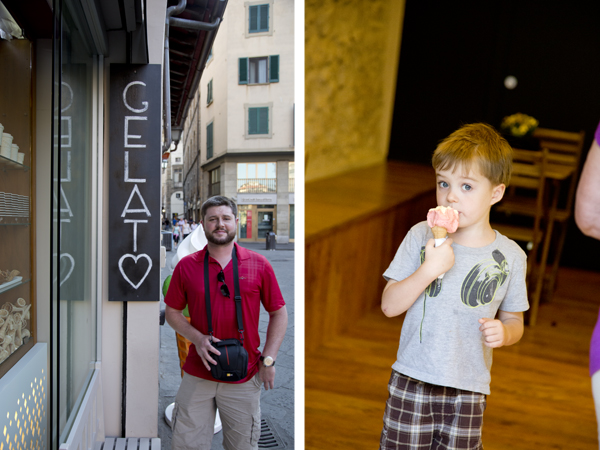 This was right net to our hotel so we had to check it out. 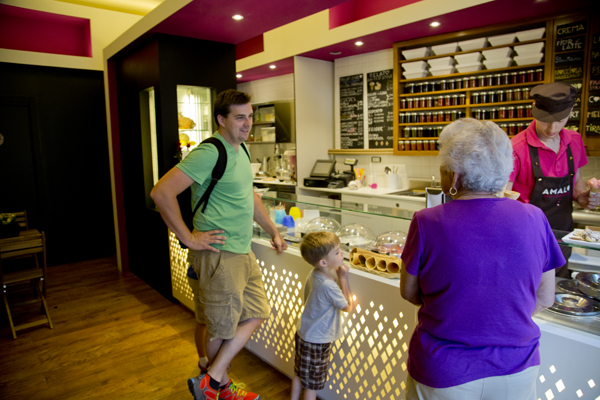 Waiting at the counter. 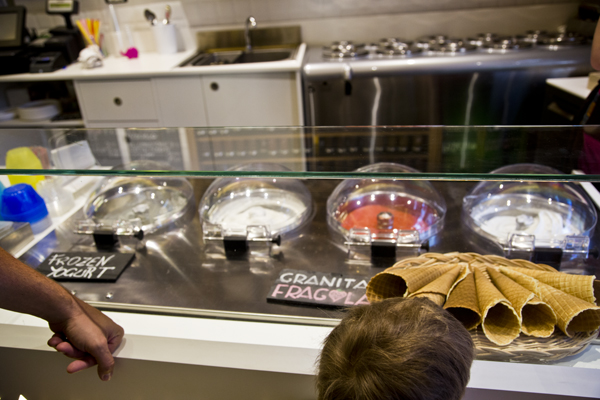 Grom: Everyone we know that has been to Italy told us that Grom had the best gelato in all of Florence and that as far as food was concerned, this was the one place that we had to go. It was good. Very good. And I get what all of the fuss is about, but it wasn’t quite my favorite. If you go be ready to wait in line. This place is packed. 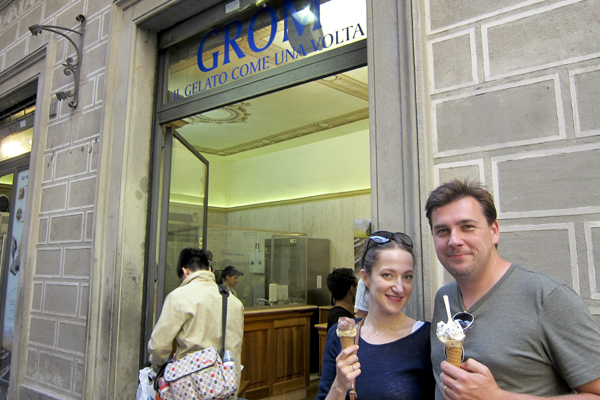 Grom was a zoo so we only took pictures outside. 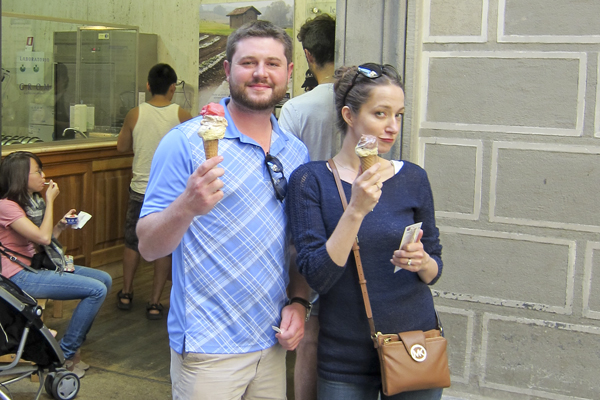 Goofing off with our gelato cones (well, I’m goofing… Mat’s just being cute)

Gelateria La Carraia: This was our hands down favorite in all of Italy (yes, ALL of Italy). This is the one that our waiter at Trattoria Vecchio Mercato insisted we try. When we told him that we were going to Grom he said that that Grom was overrated and popular because it is in all of the guides but that if we really wanted the best of the best we needed to head over to Gelateria La Carraia. He was right. It was amazing and they had a huge selection of flavors. I could have made myself sick trying all of them! 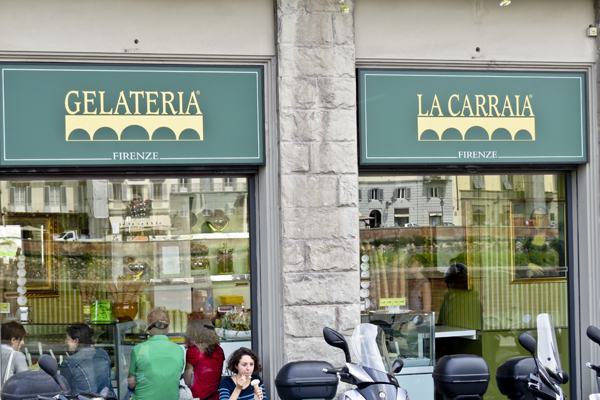 The best gelato in Florence. 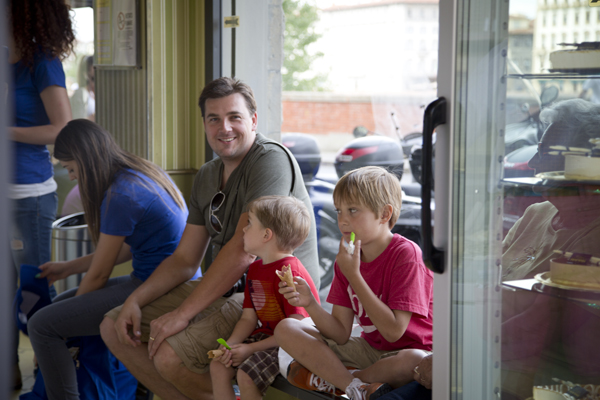 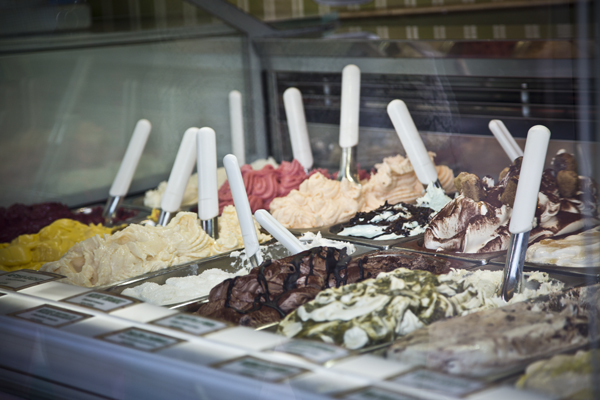 Look at all those choices! 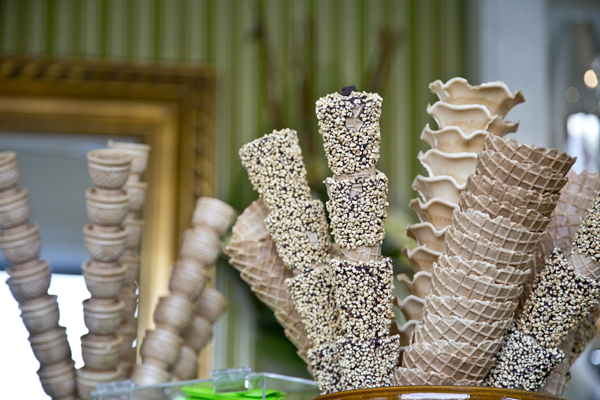 And then they have all of these lovely cone options!

And finally, to wrap up the food portion of our Florence trip… There are adorable little fruit and vegetable stands all over the city selling gorgeous fresh produce that makes for the perfect mid-afternoon snack. 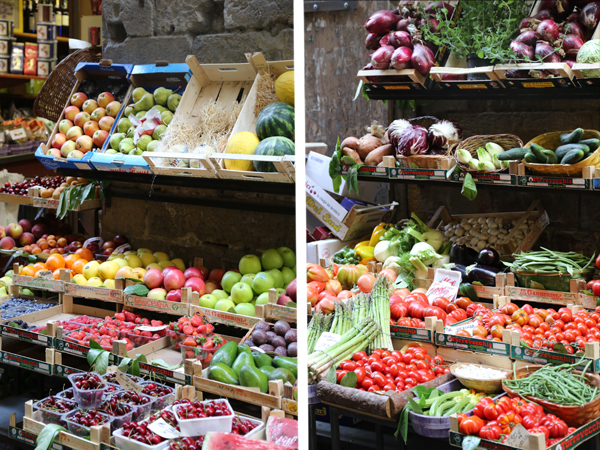 Look at all the beautiful produce!