To make up for a lack of posting I’m about to share something with you that is going to knock your socks off. For ages, people have been raving about the Baked Brownie; apparently it is even one of Oprah’s favorite things. All of my favorite cooking blogs from Smitten Kitchen to The Brown Eyed Baker have put their own spin on it and I’ve had the recipe stashed in my “to-do” box for ages. I was craving brownies the other night and I decided to finally give it a whirl. I made the original recipe first (gluten-filled flour and all) because I wanted to know exactly what made the brownies special in the first place. They were amazing… so amazing that I immediately had to make a gluten-free version so that everyone could enjoy them. I formulated a few different recipes that would use different types of flours but they were getting a bit complicated and it occurred to me that part of the reason I love brownies so much is that you can throw them together quickly with very little effort, sort of like a lazy person’s gooey chocolate cake. So I tried the laziest variation first and it worked!

The original recipe calls for dark chocolate, but I ran out after making the original so for the gluten-free I used semi-sweet and it was just as good. David actually liked them better than the original because he isn’t a fan of super dark chocolate (I am though and would probably always use dark chocolate if I had the choice). If you’re not gluten-free want the recipe just do a search for “the baked brownie.” Seriously, best brownie ever… I like it enough that I’m going to be buying their cookbook (Baked: New Frontiers in Baking

). For my gluten-free buddies, here’s what I made the other night:

Sorry the picture isn’t great. I totally forgot to take one until David had already served them and I made him hurry and snap a picture of his plate. 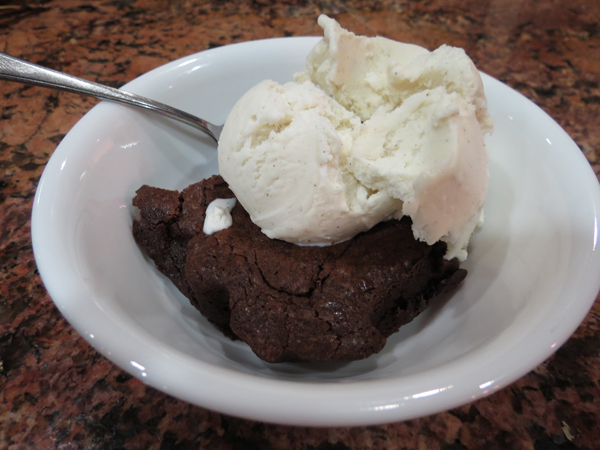