There is no greater way of bonding with friends and family than cooking together over an open fire. Some of my best and earliest memories involve roasting marshmallows and hotdogs over the fire at my grandfather’s ranch. The tradition of cooking over a fire continued long after David and I got married with yearly bogrács parties (a bogrács party is a get-together where you cook soup in a large cauldron – the bogrács – over an open fire). 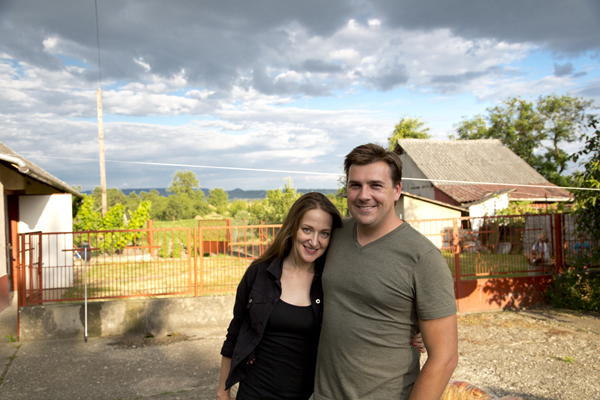 Despite the storm clouds, the rain didn’t mess up our szalonna sütés 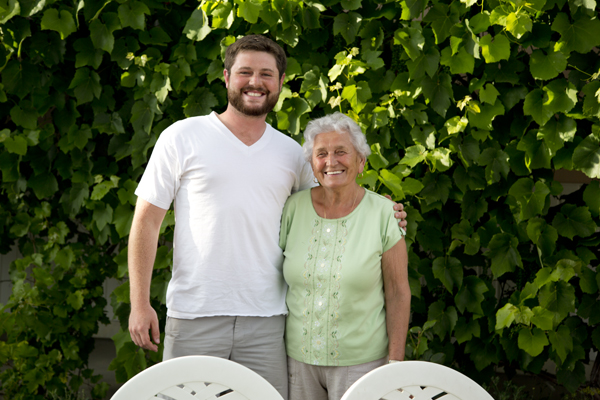 One of my favorite open fire cooking activities is a szalonna sütés or bacon roast. For those of you that have not have the privilege of attending one of these events, I’ll break it down for you. 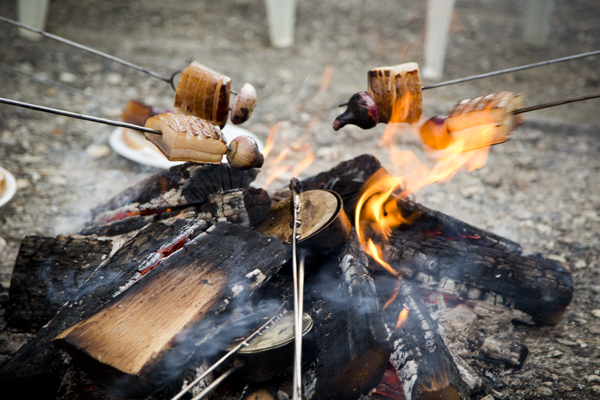 Szalonna roasting over an open fire.

Basically, all that is needed is an open fire for cooking, several skewers for holding your szalonna, thick slices of crusty bread to catch the drippings, onions and vegetables to make it a meal. Oh, and you need szalonna, and lots of it! 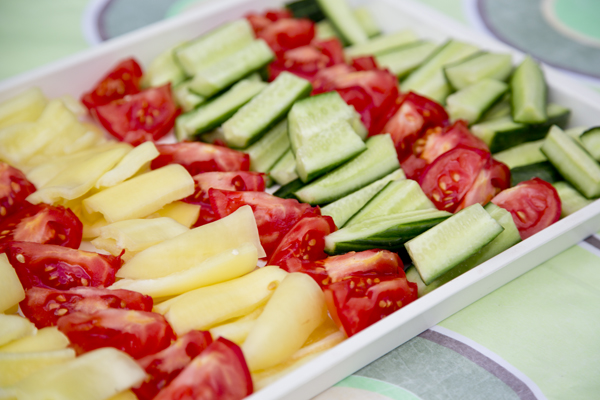 The veggies are important. We went through several trays of them! 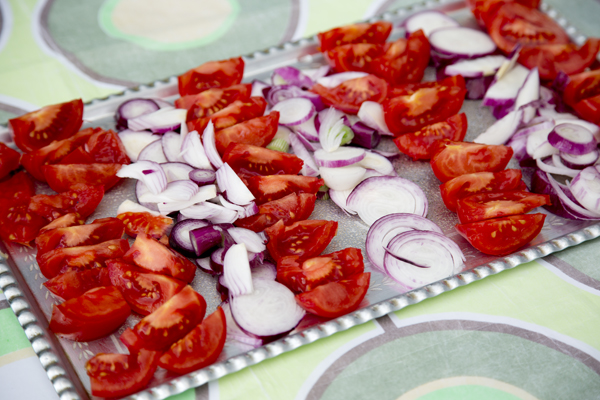 Red onions and tomatoes are the perfect accompaniment for the szalonna. 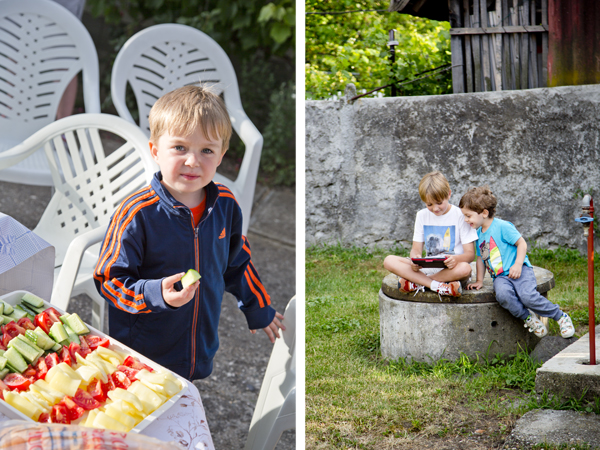 Little Man steals some veggies while he waits and Big Guy and Gabo’s sweetie play on an iPad in the garden.

So just what is szalonna? Szalonna is the Hungarian word for bacon, but it isn’t anything at all like the bacon we grew up eating with our eggs and toast. Szalonna is thick cut slab bacon and you won’t find it in your average grocery store but you can generally get it at European markets, butchers or specialty shops. On a side note, Hungarian’s call American style bacon “bacon szalonna” which would translate into “bacon bacon.” 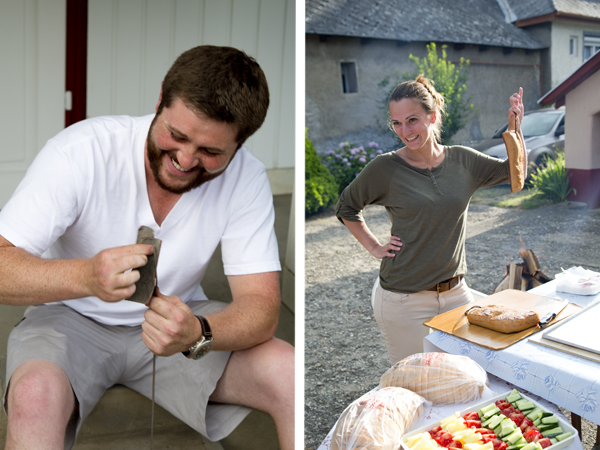 Mat prepares the skewers and Panni shows off a slab of szalonna.

Anyway, back to the szalonna sütés. The first step is building a fire. You want to get a good sized wood fire going (do not use starter fluid or your szalonna will taste like starter fluid and that’s just gross) and then let it burn down a bit because you don’t want to place the szalonna directly into the fire, but rather over the hot coals that the fire has made. As the fire is getting started, someone needs to prepare the bacon, vegetables and bread. 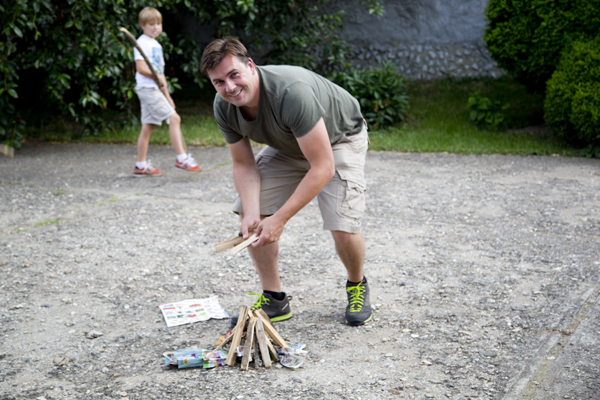 David gets the fire started. 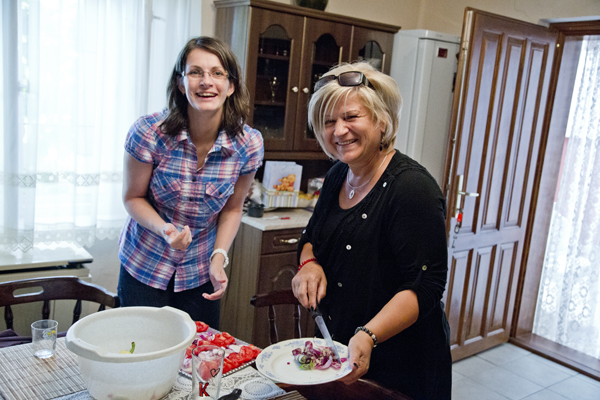 The large slab of szalonna needs to be as fatty as possible with very little meat (I know, super healthy). You cut the slab into decent sized pieces for cooking and score the top in a cross-hatch pattern. Our pieces were probably about 1.5”x1.5”x2.5” but you could make them a little bigger. Once they are cut, place the szalonna on the end of your skewer along with a small onion (we like red onions). The onion serves to both flavor the bacon and as a stopper to keep it from falling off of the skewer as it cooks (because bacon grease is slippery). Now you’re ready to start cooking. 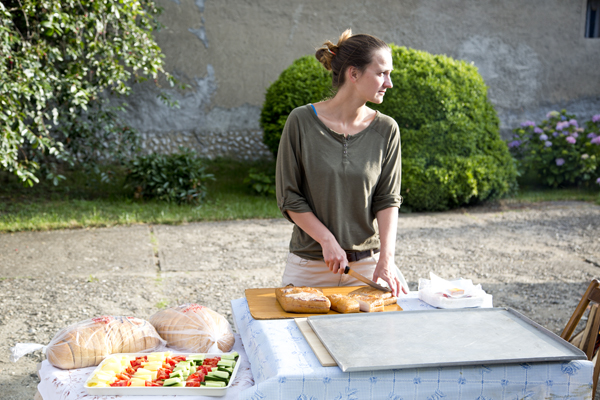 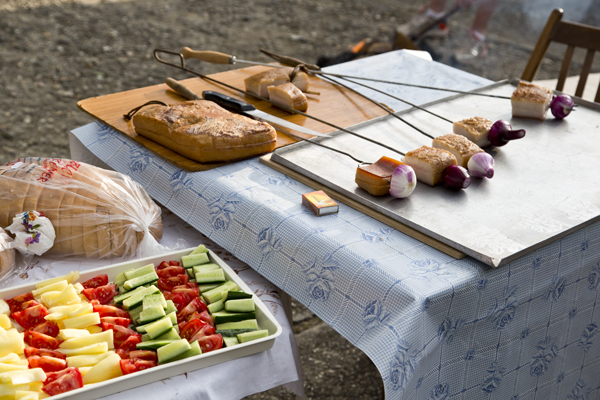 Ready for the fire. 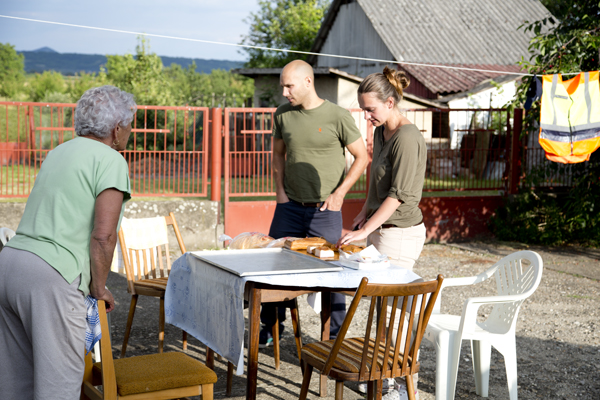 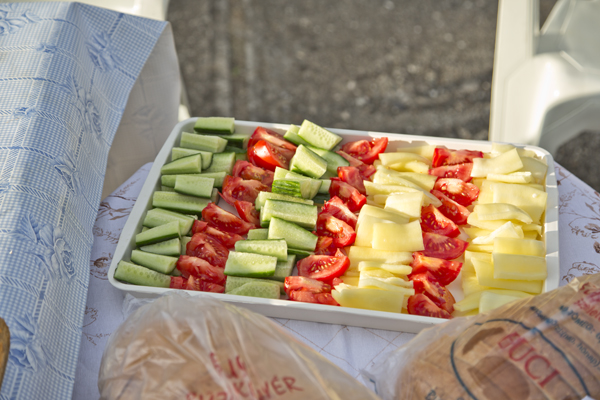 You want to have a plate with your bread sitting right at your feet as you roast your szalonna over the fire because the whole point of this process is to collect the bacon drippings onto your bread. There are several ways that you can approach the bread portion of this process. I tend to be a purist and like the plain bread with the bacon drippings. Others prefer to spread their bread with sheep’s milk cheese or top it with vegetables first. The important thing to remember is that there is really no wrong way to do it and experimenting with flavors can be fun! So, once your szalonna is starting to cook, it will start to drip grease. When this happens, you want to carefully move the szalonna over your bread and collect the drippings (this is the point of the entire process). Once it stops dripping onto the bread, return the szalonna to the fire and continue cooking/dripping until your bread it completely covered (some people like to completely saturate the bread). The szalonna can keep going until it starts to get crispy at which point in can be cut up and eaten or discarded. It is very important that you don’t char the szalonna or it will become extremely bitter. 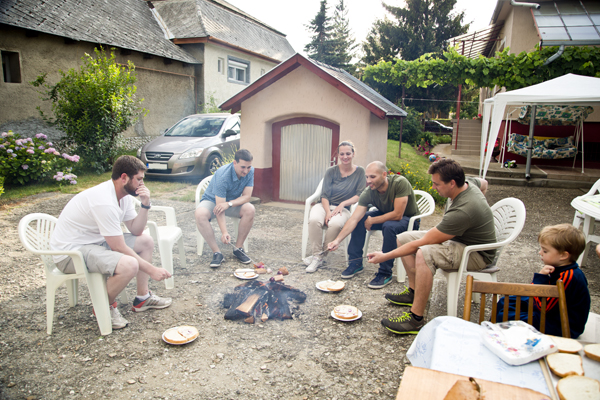 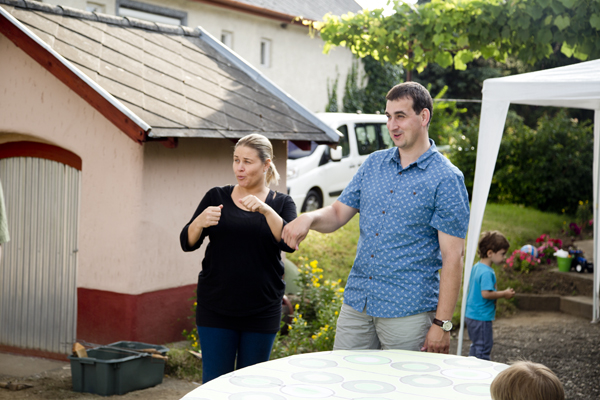 Gabo and Kori give instructions on the proper roasting technique. 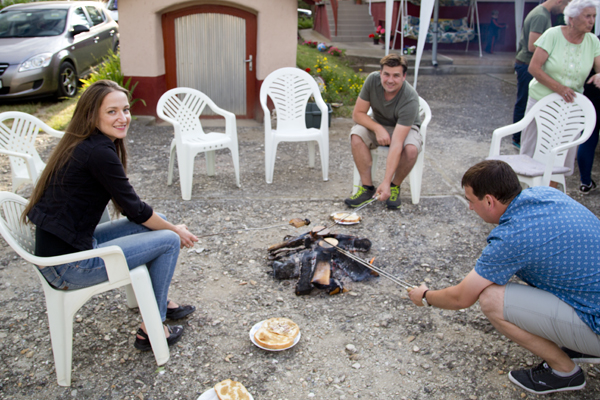 I got involved on the roasting as well. 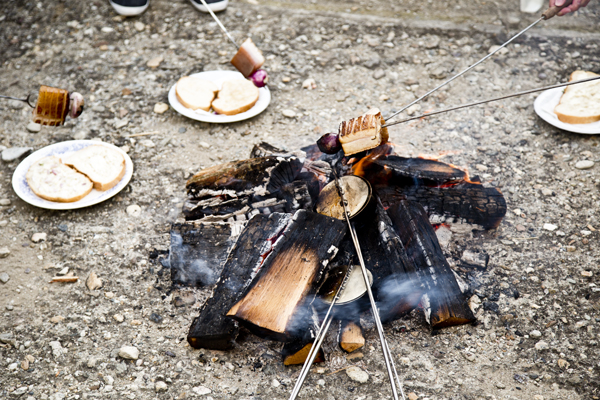 You want to make sure that the bread is close by so you don’t loose all of the drippings! 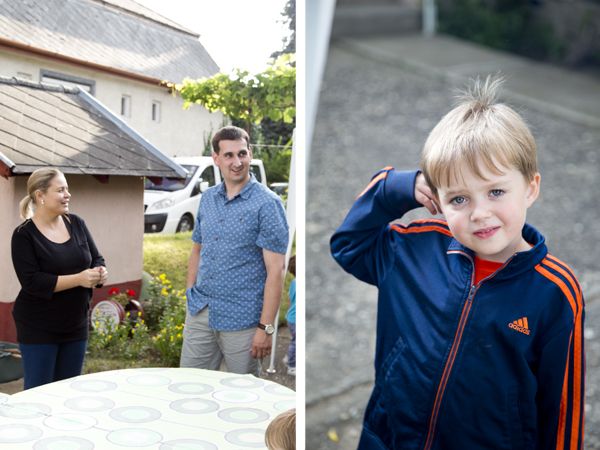 Everyone had a wonderful time!

Once your bread is adequately soaked in bacon grease, it is time to eat. You’ll want lots of veggies to accompany the bread, especially tomatoes, peppers, red onions and cucumbers. To make the event truly Hungarian, you should also toast with a shot of pálinka (a traditional Hungarian fruit brandy). I am told that the pálinka helps cut the grease to avoid indigestion. I’m not sure if this is true or not but a szalonna sütés just wouldn’t be the same without it. 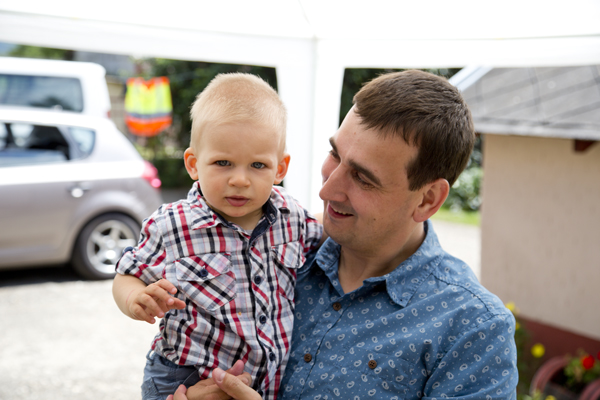 Hanging out with Kori and Rita’s little cutie was one of the best parts of the evening! 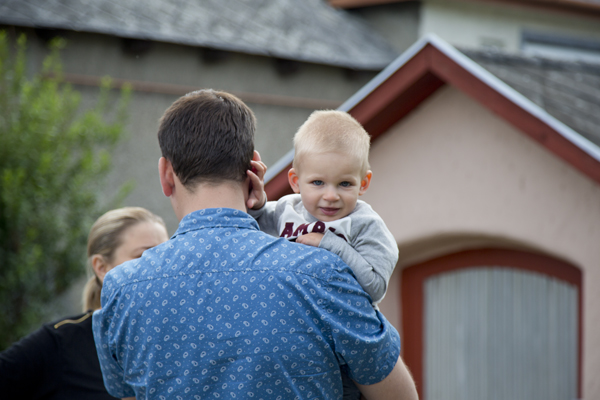 Serioulsy! Look at how adorable he is!