Music tastes change over time and I find it very interesting that since having kids, my tastes have become much more eclectic. If it weren’t for the little guys in my life I might have been perfectly content to listen to the exact same songs I was listening to in high school, but alas, the little guys can only take so much 90’s music. I’m glad that I’ve been able to pass on some of my musical tastes to my kids (they are big time Pearl Jam lovers) but they have also passed some of their tastes onto me. I can’t imagine that I would listen to a band like One Direction, for example, if it weren’t for the little moppets in the backseat squealing with glee every time one of their songs comes on the radio. Now that I do listen to them, I’ve found that I actually think they’re pretty good. I also doubt that without the kids I would be able to sing the entire Frozen soundtrack from memory (The snow glows white on the mountain tonight Not a footprint to be seen). My kids like upbeat songs that they can dance to, which is why most of the songs on this month’s list would be totally appropriate to incorporate into your workout playlist (or you could just dance around to them in your living room like we do), but there are some slower jams on there as well. My youngest asked if one of the songs is a “Jesus” song because it sounds like something he heard at church (Geronimo) or if another was a farmer song (Honey, I’m Good ) because apparently he thinks it has a certain country ring to it. When one of the songs comes on it puts us all in a good mood and makes is reminiscent of our summer adventure (Budapest) and another makes my oldest want to drive to Malibu (Riptide). Then there is the “Starbucks Lovers” song (Blank Space) which Taylor Swift and Starbucks had fun with on Valentine’s Day.   And of course there is the one song that makes us all want to stop everything we’re doing and just dance (Shut Up and Dance). 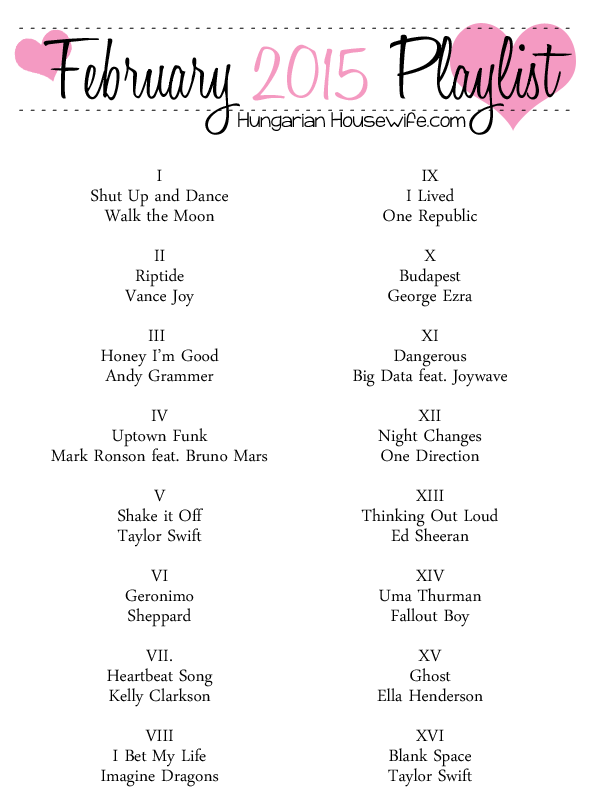 You can download all of the songs via iTunes by following these links:

Shut Up and Dance / Riptide / Honey, I’m Good / Uptown Funk / Shake It Off