Someone asked me about our car’s window and how we got it fixed, especially in the middle of a road trip. Well, it’s kind of a funny story. If any of you have ever had to get anything on your car fixed, you’re probably familiar with the concept of needing to order parts and I’m sure that you’re also well aware that said parts usually take two to three days to arrive. This is exactly the sort of thing we were running into in Rome after our window was broken and there was no way that we could stick to our itinerary or our budget if we were going to have to wait around in Rome for three days while the car got fixed (plus, it would have cut out Tuscany and Verona and that was beyond unacceptable). Also… have you ever driven at high speeds on the highway with the window down? That was not exactly something we were looking forward to either.

Anyway, long story short, we were able to find an auto glass repair shop on the outskirts of Rome that was willing to put in a temporary window so that we could continue on our trip (David’s cousin had a glass shop in Budapest that was going to be able to fix it once we made it back). We were super excited. The only drawback was going to be that the window would not roll down so the person sitting behind the driver (me) would have to pay all of the tolls along the way (if you’ve never been to Italy, they have A LOT of toll roads), but that wasn’t really a problem.

Everything started out great. We had a new window, the toll booth workers thought it was hilarious that I had to lean out the back window in order to pay them a toll, we were laughing that we were going to have a great story to tell when we got home. Then it happened. It started out as a little squeaking sound. Then the window started rattling a little and then the rattle became increasingly violent and started to pull away from the car. At the rate we were going, we would lose the window before we made it ten miles. David pulled off at the first gas station we came across and our problem was immediately evident. The temporary window was secured with electrical tape. Like the black kind that you put on the end of your electrical cords when they start to fray. No wonder it wasn’t holding! I can’t get electric tape to stick to my cords half the time, could we really be surprised it wasn’t holding together the car at high velocities? We needed something strong. We needed something durable. We needed duct tape. 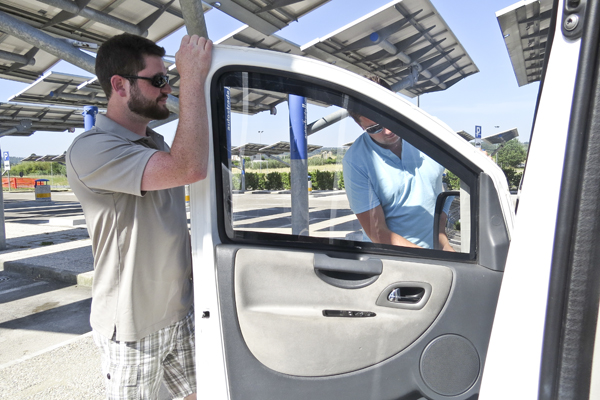 We went inside the gas station in search of duct tape but they didn’t have any at all (they did however have a wonderful selection of chocolates and various snack foods that we decided we NEEDED to bring along on our journey). We were waxing poetically about how nice it would be if we only had some duct tape

when Mat piped up and said, “You guys are going to think I’m crazy but I think my mom might have packed duct tape in my suitcase. I thought she was a little nuts when she wanted me to throw it in but she kept insisting that you never know when you’re going to need duct tape.”

It was like the clouds opened up and angels were singing in the sky. Lo and behold, there was a small roll of duct tape in the front pocket of Mat’s suitcase. It was just enough duct tape 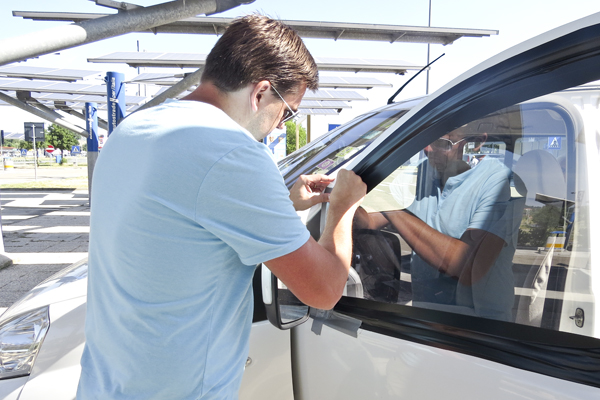 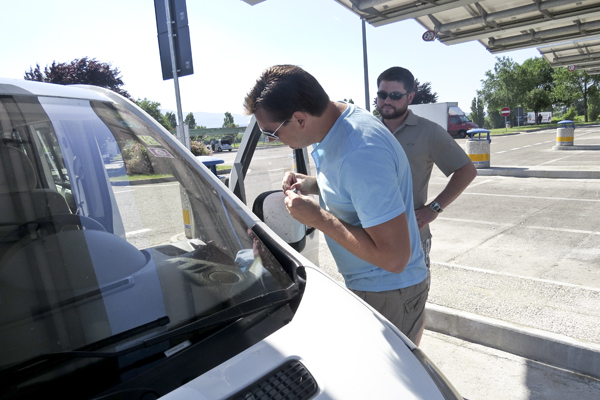 Checking out their tape job.

Moral of the story? Never leave home without duct tape

… and Aunt Debby is kind of a genius.