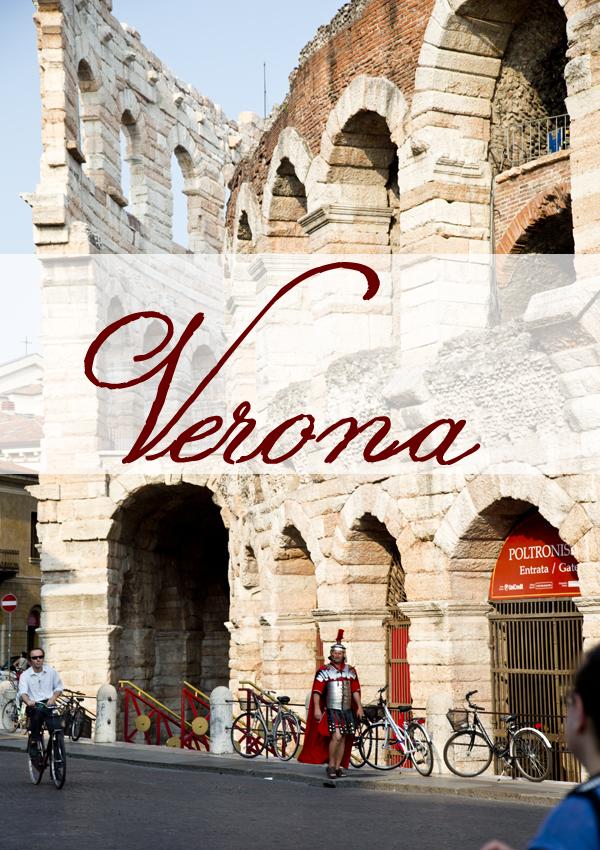 Northern Italy is far more beautiful than I had imagined with its rolling hills and vineyards. Nestled in the heart of Northern Italy’s Veneto region, astride the Adige River, lies fair Verona which is where our adventure took us next. 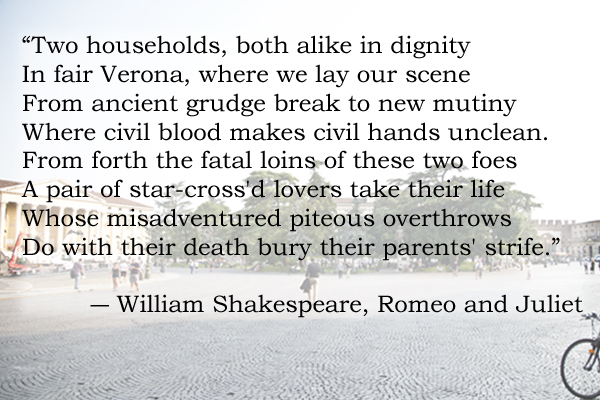 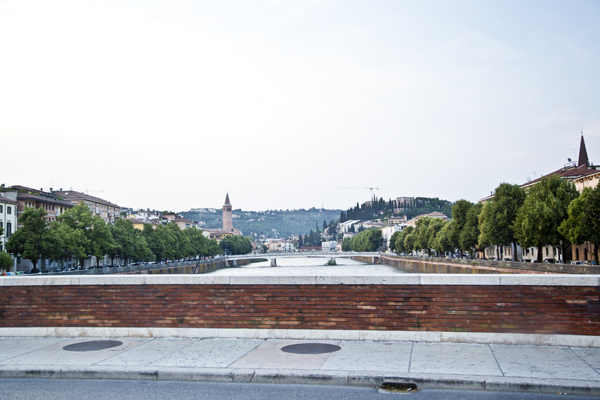 Mat shares my love of Shakespeare, so we definitely wanted to see the city made famous by both Romeo and Juliet

and The Two Gentlemen of Verona

(I had hoped we would have a chance to make a quick stop in Padua – the setting of my favorite Shakespeare play, The Taming of the Shrew

– but we’ll have to save that for another trip).  Of course, at the top of our list of places to start was Casa di Giulietta (Juliet’s house), an early 14th century home with a courtyard and balcony that claims to be the house of the Capulets from Romeo and Juliet. The courtyard is filled with tradition; many people inscribe their names on the walls of the entrance believing that that it will make their love everlasting, they also place love locks on the gate as a sign of their love. Most famous, though, are the thousands of letters placed in the walls each year. If you are familiar with the film Letters to Juliet

on which it is based), then you know about the Club di Giulietta which is a group of women who have been answering letters addressed to Juliet since the 1930s (according to Wikipedia they get more than 5000 each year). 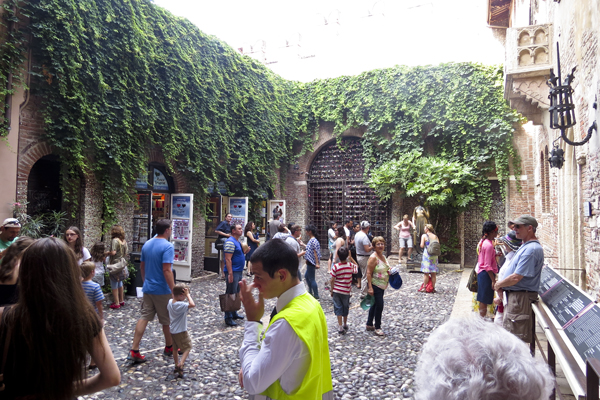 Juliet’s Courtyard, you can see the locks on the gate 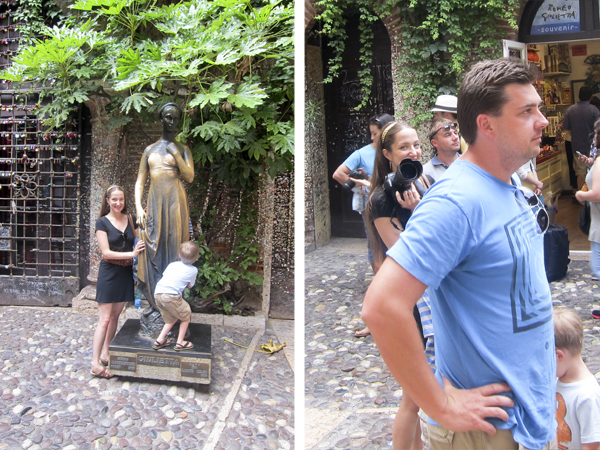 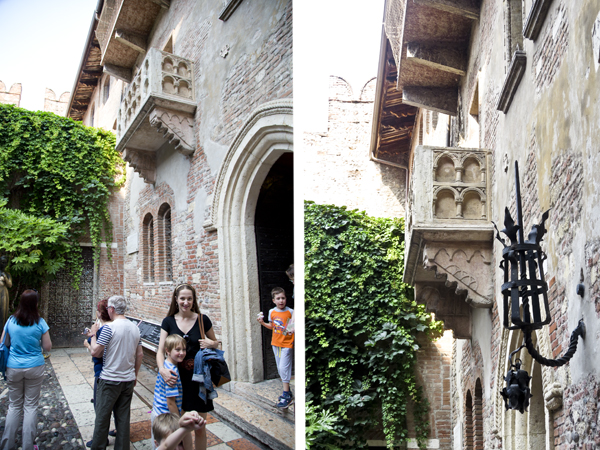 Verona is a lovely city filled with history, art, sidewalk cafés, churches and boutiques. I loved walking through the city gazing at window displays and watching people as they meandered down the pedestrian streets. The boys did some shopping, popping into a soccer shop to stock up on World Cup memorabilia, specifically soccer balls that they could kick around the yard once we returned to Dédi’s village in Hungary. 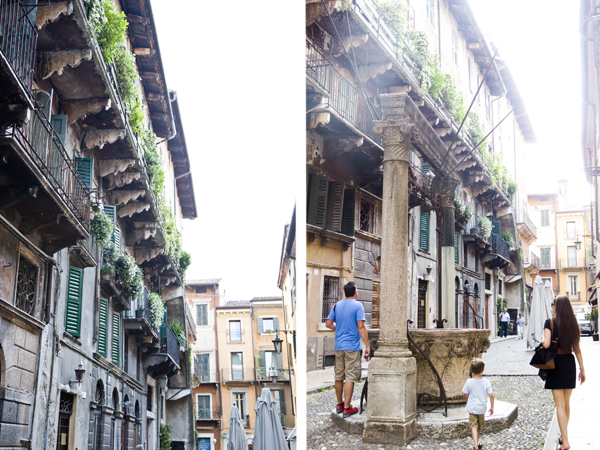 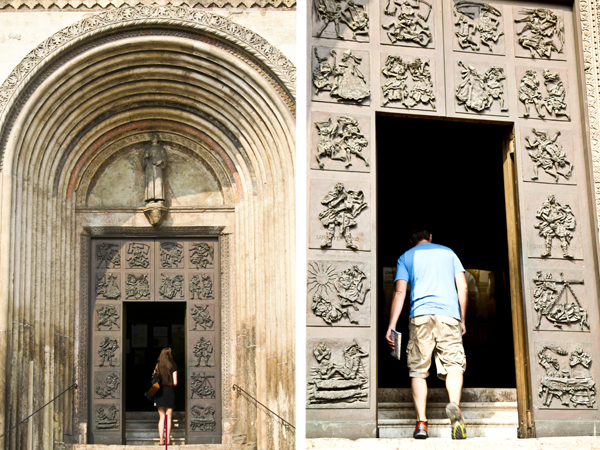 How gorgeous are these church doors? 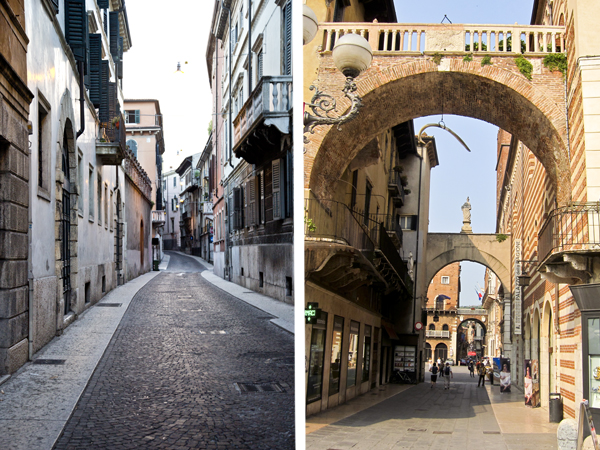 Some of the lovely streets of Verona 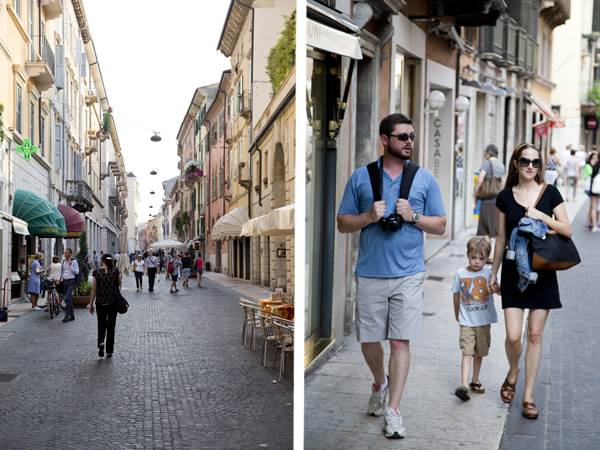 One of the most impressive sights in Verona is the Verona Arena. The arena is an ancient Roman amphitheater in Piazza Bra that is still in use today for concerts and large-scale opera performances. Piazza Bra, or just Bra to locals, is the largest piazza in Verona and is home not only to the arena, but also the Verona Town Hall (Palazzo Barbieri), Palazzo della Gran Guardia, and a large garden that is filled statues, fountains and towering cedar trees. 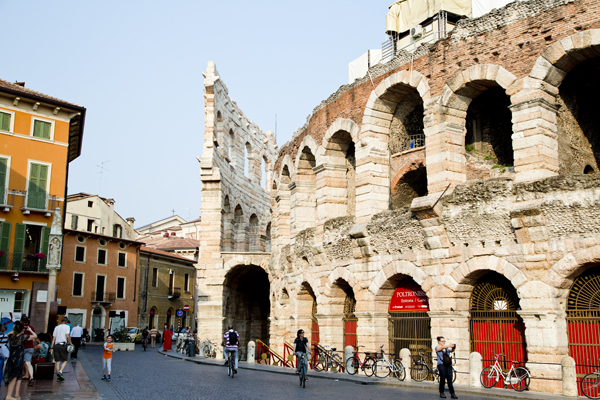 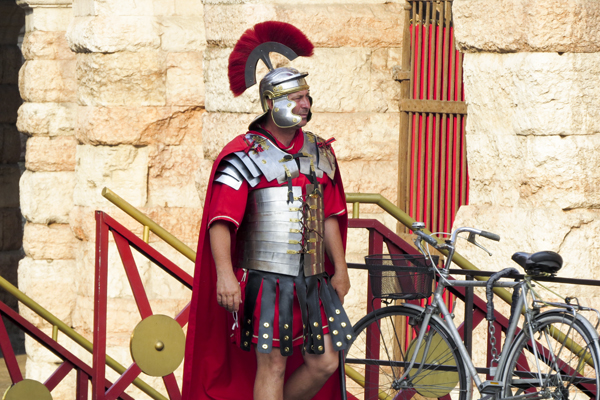 An actor dressed as a Roman Soldier 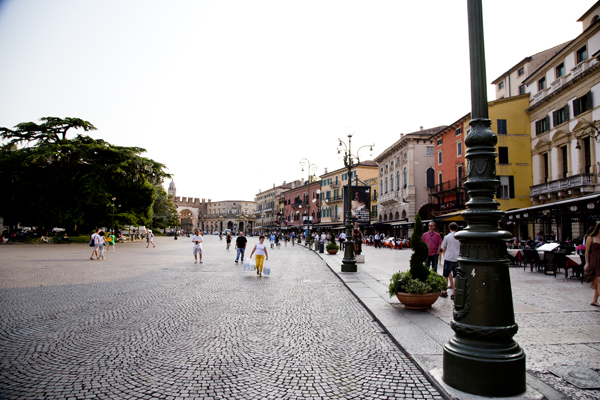 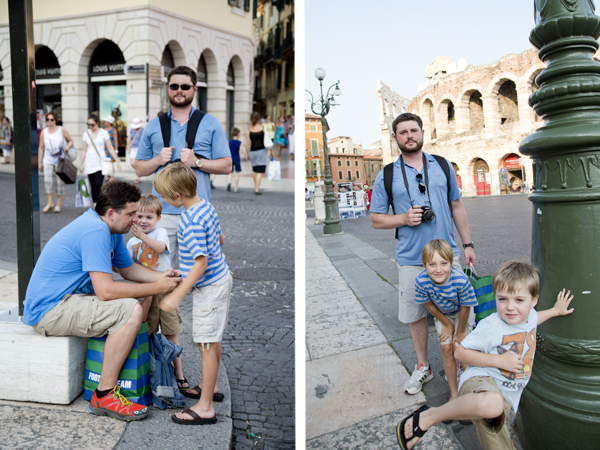 The boys in Piazza Bra 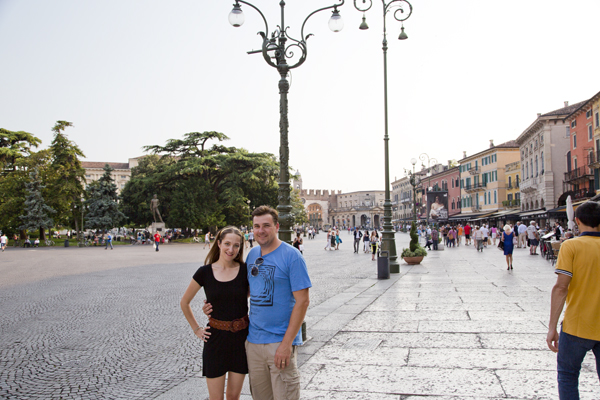 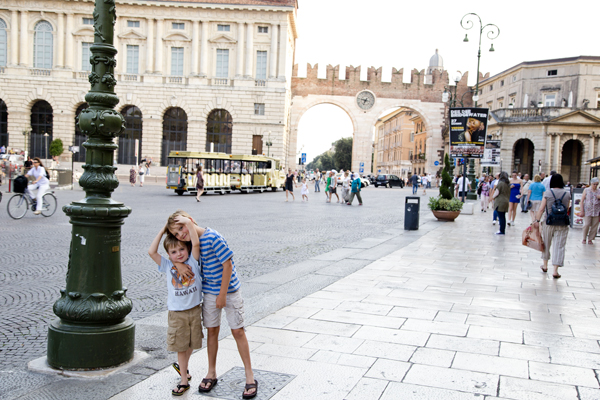 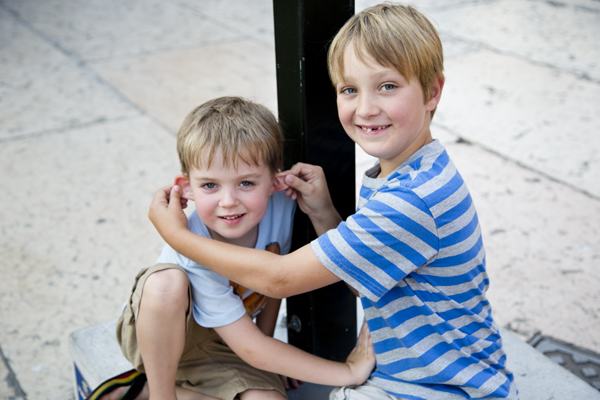 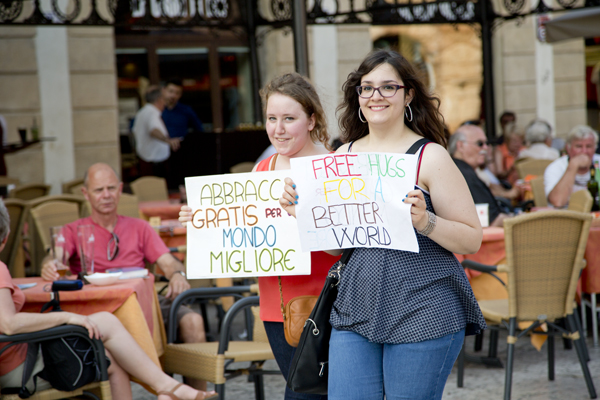 Another lovely piazza was Piazza delle Erbe (Market’s square) which used to be the town’s forum during the Roman Empire. Today it is home to souvenir kiosks, restaurants, cafés and a beautiful fountain, the Madonna Verona, which is the square’s most ancient monument. 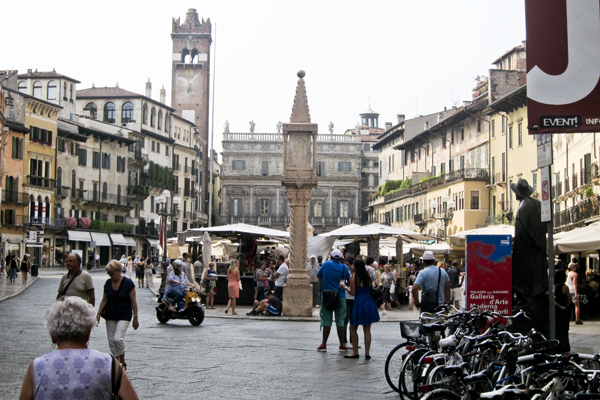 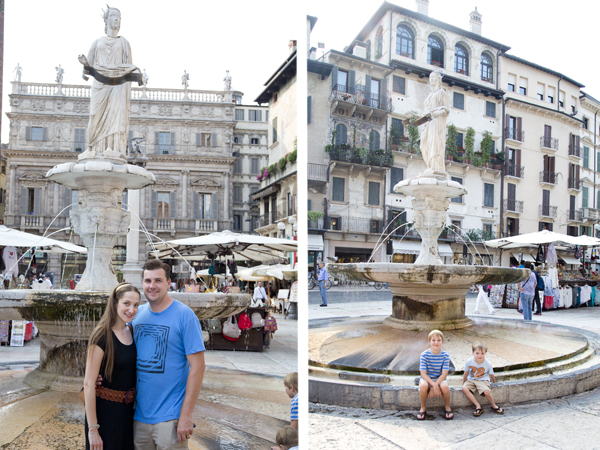 Posing with the Madonna Verona 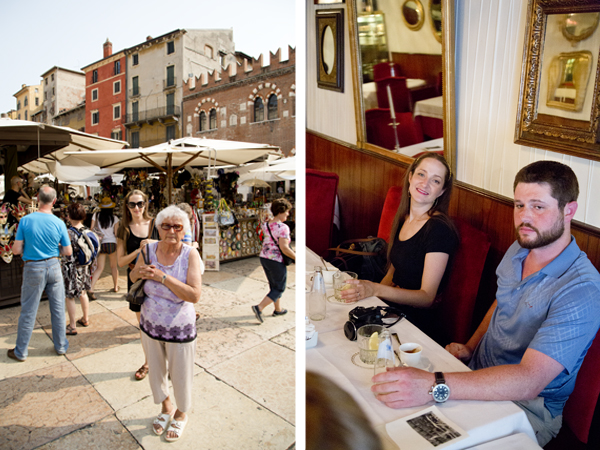 Shopping the souvenir kiosks and having a quick snack

Verona, like most of Italy, is home to some beautiful churches. Dédi even attended evening services at one of the cathedrals while the rest of us had a quick snack in a little café (the boys were not in the mood to sit through a Catholic mass, especially since it was in Italian). After the mass we enjoyed our last dinner in Italy before settling in for the night at our hotel in nearby Tregnago. 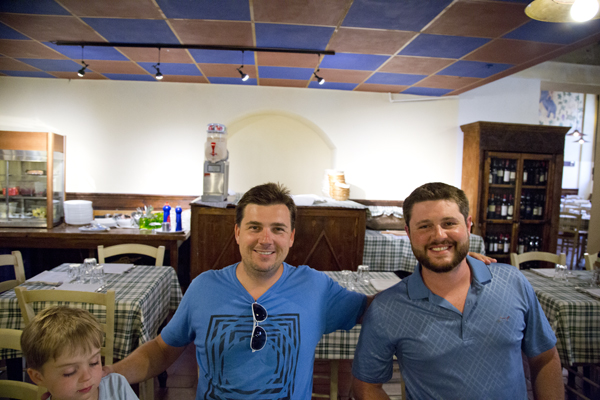 Sitting down at the restauant 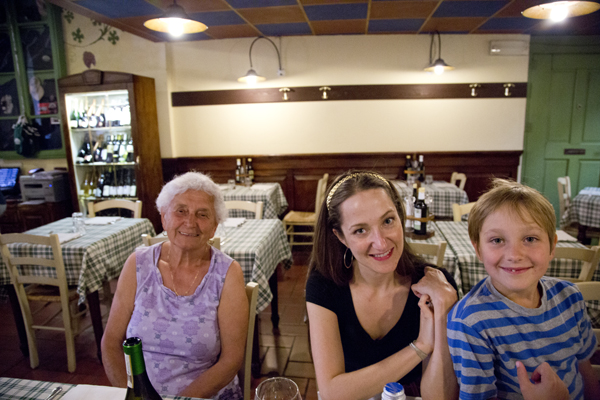 The hotel, Residence Villa Vinco, is made up of several apartments. We stayed in the Castello apartment, which we had to take several flights of stairs to get to (there were no elevators). Once inside we were impressed by the apartment. It was about 110 square meters (about 1200 square feet) with two bedrooms, one bathroom and a large open concept kitchen and living room area. Little Man was most impressed with the fact that when he stood on the bed in our room he could touch the ceiling (well, he could touch the beams, but that was good enough for him). The hotel didn’t serve breakfast, but since we were in Italy, there was no shortage of great cafés for our morning cappuccinos. 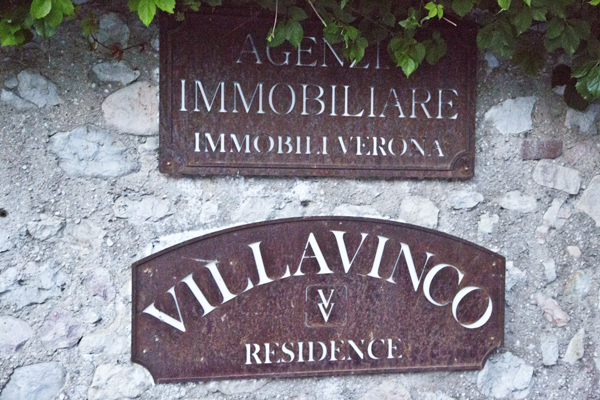 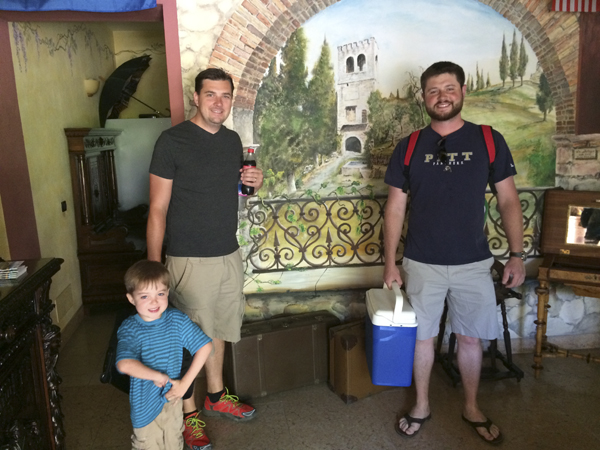 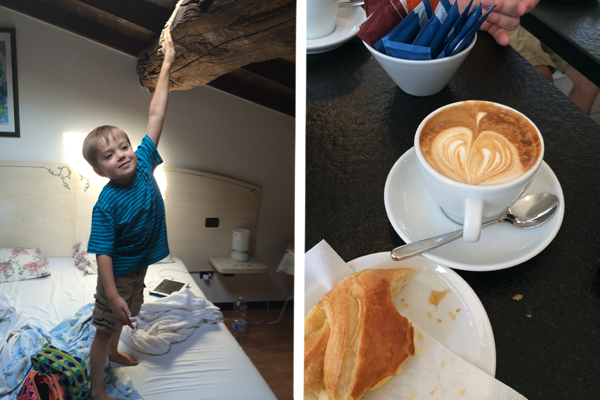 Little Man reaching for the beams and our final Italian cappuccino