I’m late getting to this post, but we still have a lot of October left! So, without further ado, here are just some of the things I’m loving in October. 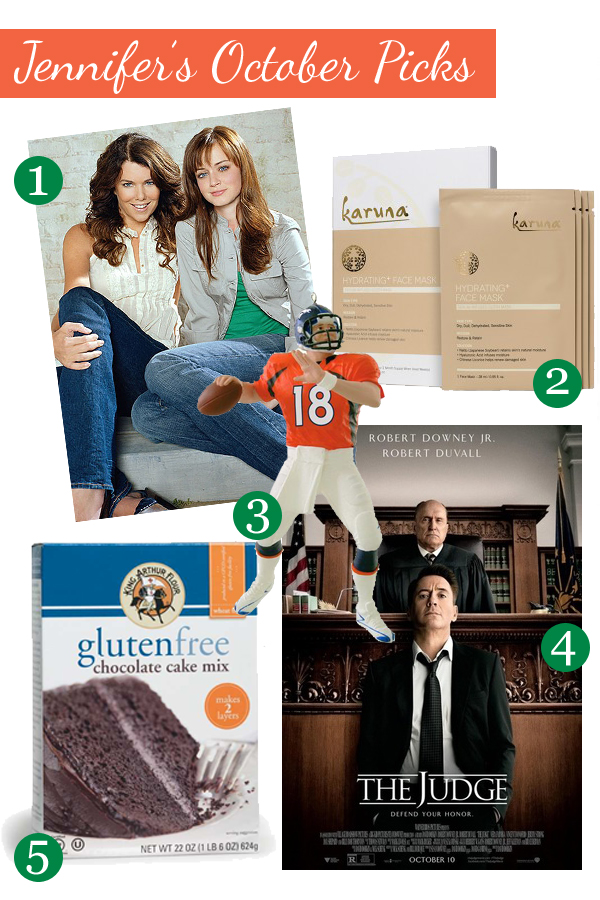 : Watching the many adventures of Lorelei and Rory Gilmore and the rest of the Stars Hollow gang  is one of my favorite pastimes and since Netflix added Gilmore Girls to its streaming content on October first, I am able to binge watch to my heart’s content. No more searching for the right DVD or trying to remember which episode I left off on! Between this and season three of Hart of Dixie

, I’m going to be in Netflix heaven!

: I had one of these show up in my monthly Birchbox subscription last year and I immediately became obsessed. They make my skin feel absolutely glorious! I try to do one at least a couple of times per month and lately I’ve been trying several of Karuna’s other masks and have yet to be disappointed.

4. The Judge: David and I were invited to an advanced screening of this film a while back and I was blown away by the actors’ performances. Seriously, everyone was incredible. Who doesn’t love Robert Downey Jr. and Robert Duvall? The movie was not what I expected – it was slower paced than the preview makes it seem – but it was great, although sometimes hard to watch. Vincent D’Onofrio might just be the most underrated actor of all-time and his performance in this is exquisite (really, the entire cast is awesome).

: I have tried every gluten-free cake mix I can get my hands on but none of them were up to my standards. Until now. King Arthur Flour has formulated what is hands down the best gluten-free cake mix on the market. It is rich, moist and beyond delicious. I am a big “from scratch” girl, but I am hard pressed to find a gluten-free cake recipe that I like better than this one. It’s also super easy to make so I can’t keep them around the house or I’ll get myself into trouble. Seriously, this is better than any non gluten-free cake mix you’ll find in the super-market aisle.