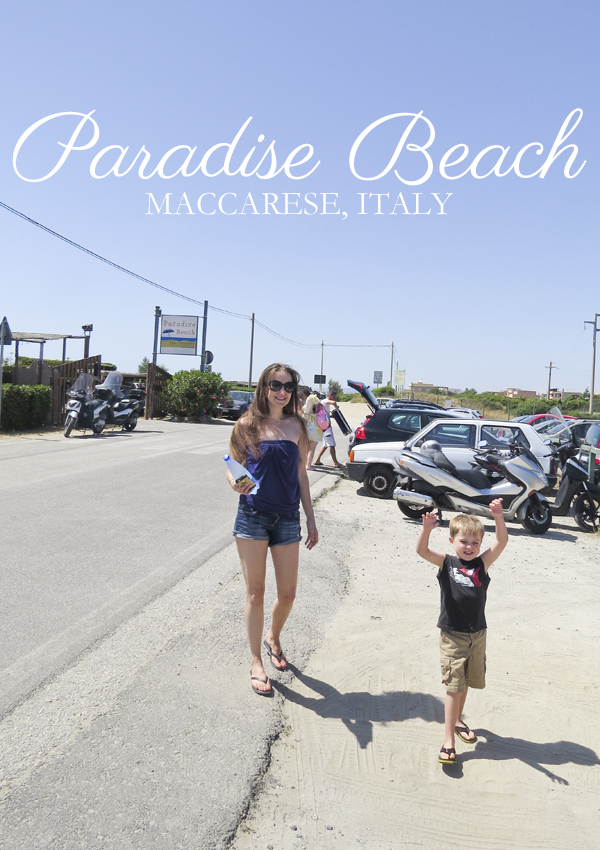 Being a California girl, going to the beach is something that I tend to take for granted. We can go pretty much any time and just plop our towel down in the sand, throw on some sunscreen and we’re ready to go. Not so in Italy. The Italians have a much more involved process for going to the beach. First of all, the California notion of free beach access is pretty much nonexistent. Most of the Italian beach front is divided up into private beach clubs where you pay for beach access and then you have the option to rent a chair, umbrella or other beach accessories. Your entry fee also gains you access to bathrooms, changing rooms, showers and a café (and sometimes a restaurant). 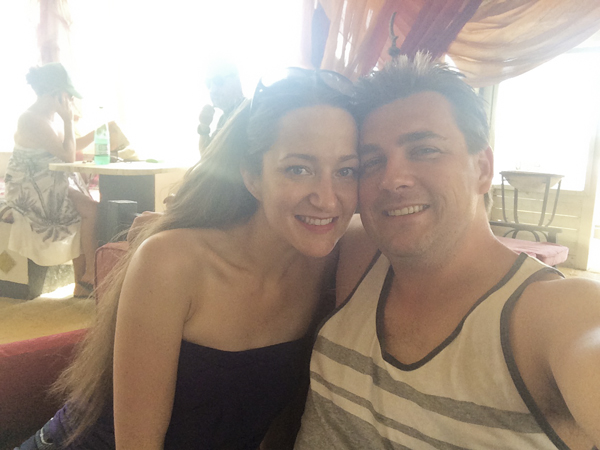 Me and David inside of the Paradise Beach cafe

After our long day at the Vatican, we decided that the boys needed a break and there is no better way to decompress than taking a daytrip to the beach. After doing some research online, David found a beach not too far outside of Rome called Paradise Beach in Maccarese. 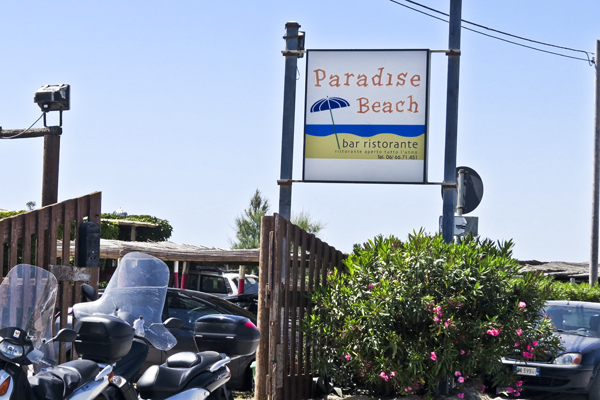 Located at the very end of the road in Maccarese, Paradise Beach would be difficult to reach without a car, which means that it is very light on tourists but also that most people don’t speak much English (although one of the ladies that worked there was originally from Romania and had Hungarian grandparents so she was able to converse with David and Dédi in Hungarian). The Italians don’t look too kindly upon children digging in the sand or building sand castles, but because the water is fairly shallow with little to no waves (and quite warm) the kids are perfectly happy to splash around. Another huge difference between California beaches and Roman beaches are the beach vendors. There are a ton of merchants raveling all up and down the beach selling everything from sunglasses and towels to kites and even bikinis (people actually try them on right there at the beach). Some of the peddlers are more aggressive than others, but a firm “No” will usually get them to leave you alone (and its kind of nice to know that your day won’t be ruined because you accidentally left something at home). 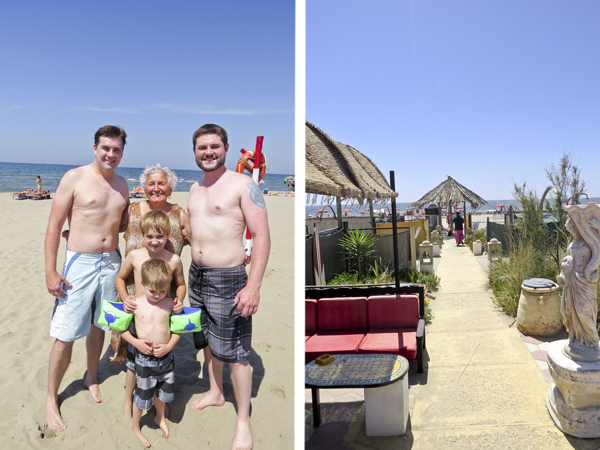 When it came time to eat, we had a wonderful lunch of spaghetti with clams, fried calamari, and grilled fish  at their lovely seaside restaurant (the tables and chairs are actually in the sand!). Ordering our food was interesting because they didn’t have a menu (the menu changes daily based on what has been caught fresh and what produce is in season) and they didn’t speak any English. This was another one of those times we were thankful for the little bit of Italian that we know! We must not have failed too badly at communicating because everyone got what they wanted. Later in the afternoon we enjoyed espressos with apple strudel (Paradise Beach is known for its delicious strudel and it sells out fast) and popsicles for the boys in their little café that is both adorable and extremely comfortable. 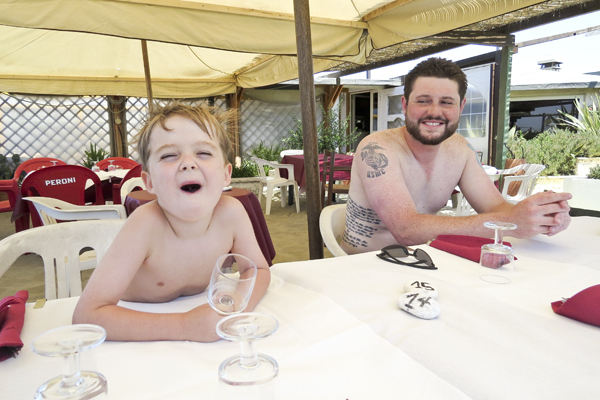 Getting lunch at the restaurant 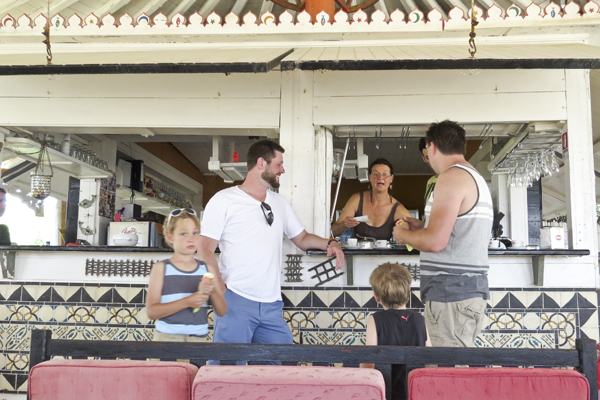 Ordering afternoon snacks inside the cafe

On our way back into Rome, traveling along the main road from Maccarese, there are four fruit stands along the way. We had read in one of the guides that all of the stands sell fantastic fruit and we were not disappointed. We returned to our hotel loaded up with some of the best tomatoes and cherries we have ever tasted! 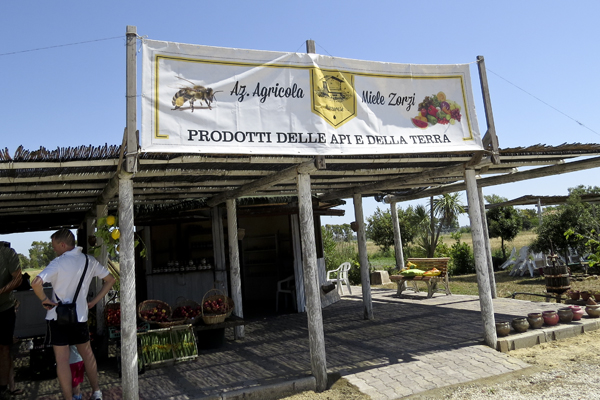 The produce stand where we decided to stop 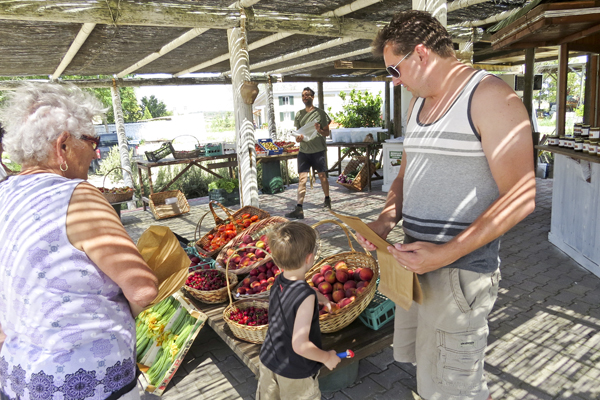 Picking out our produce 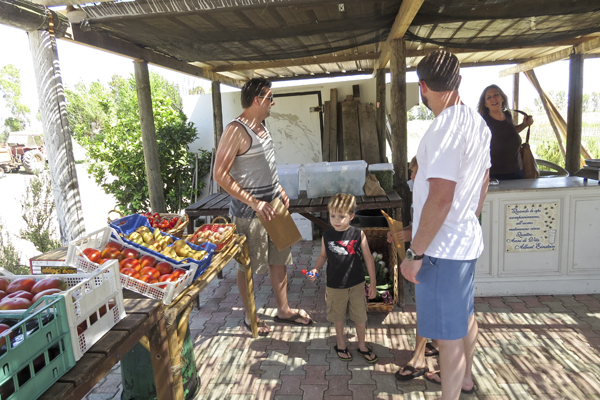 It was a great day and if you are in Rome with access to a car and a desire to spend the day at the beach, Paradise Beach is the place to go. 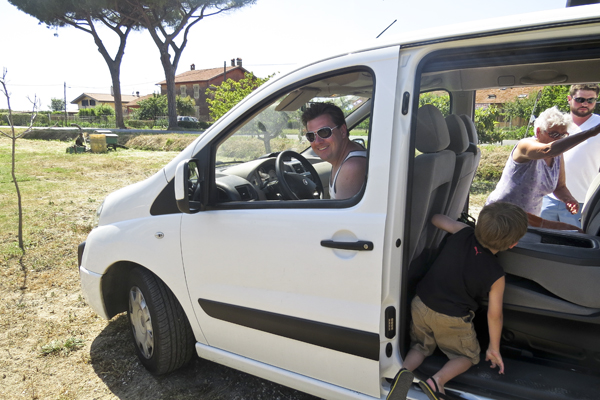 David looking out of the broken window of our car