David said that if I don’t post pictures from our European adventure soon, I’ll never get around to it, so here is the first of many installments of our trip.

In January David and I decided that we would take the boys to Hungary for the first time. The trip was long overdue and since Dédi was returning to Hungary in April, we felt that it was perfect timing to go and see her in June. We also thought that it might be fun to take a short side trip somewhere else in Europe (thinking we would hit Austria or maybe Germany) and we asked our oldest if he could go anywhere in the world, where would he pick. Without a moment of hesitation he replied, “Italy.” David suggested that since we had access to a vehicle while we were in Hungary, taking a road trip to Italy wouldn’t be out of the question adding that the drive from Budapest to Venice is roughly seven hours and that is much shorter than the fifteen to sixteen hour treks to Colorado that we make all the time. I was sold and we booked our flights immediately.

My cousin Mat had always said that if we were going to Europe to let him know and he might just tag along, so David sent him a text along the lines of, “Hungary and Italy in June. You in?” to which he received an immediate reply of, “Yes.” I was excited that we were going to have Mat come along because when traveling with children I don’t think you can ever have too many adults watching out for them. Plus Mat is super fun and since he was stationed in California while he was in the Marines, he was out to see the boys every weekend and he is like an uncle to them. He is also a total history buff so I knew that he would be a fountain of fun facts and useful information.

As our excitement grew, we knew that our party was not yet complete. While having lunch with Dédi one afternoon, we were going over our itinerary for the trip. David’s parents had traveled to Italy a couple of years earlier so they had given us some useful information about where to go and for how long. We had decided that we would take a weeklong road trip through Italy with stops in Venice, Florence, Rome, Siena and Verona. We were kind of bummed that going to Italy meant that we would have one less week to spend with Dédi (she was one of the main reasons we were going to Hungary after all) and since Dédi had never been to Italy, we asked if she wanted to tag along. She is a die-hard Catholic and we knew that she would love seeing The Vatican up close and personal, not to mention all of the extra time she would have with her great-grandchildren. She attempted to decline our invitation claiming that she would slow us down, but we countered saying that if anything we would be the ones slowing her down and we insisted that she come. It honestly didn’t take much convincing and she immediately started brain storming all of the food that she would pack for the journey.

When we were buying our tickets for the trip, it worked out that Mat would be arriving in Hungary the day before we landed. This wasn’t a problem because David’s aunt and uncle, who we were staying with while we were in Budapest, said that they were more than happy to pick him up and show him around. When David, the boys and I arrived in Hungary, David’s uncle and Mat had already done a night tour of the city, a bus tour the morning of our arrival and had ridden on the metro a few times (something I’ve still not done in all the times we’ve been to Budapest). 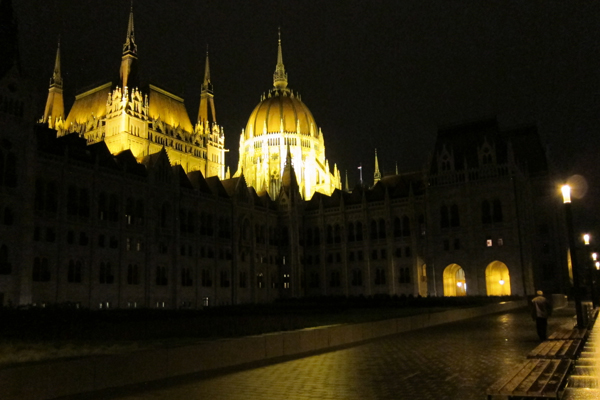 We only had one full day in Budapest before we took off on our road trip and we were terribly jet lagged. Seriously, I had no idea what jetlag was until I traveled to Europe with two children. I mean, obviously I had experienced jetlag before, but I can usually will myself back to sleep, especially if its dark and adjust fairly quickly. The boys were having none of it though, so we were up and running before the crack of dawn (way before… like I’m not sure we slept more than two hours). Since we were running on fumes, we decided we would take it fairly easy. We met up with David’s cousin and his family for lunch and some light sightseeing. The only thing on our agenda was Szent István Bazilika (Saint Stephen’s Basilica), ice cream and maybe coffee. 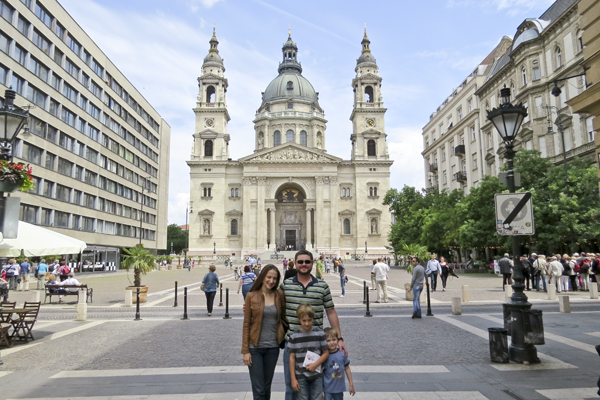 See how nicely my children pose with us.

Szent István Bazilika is named after Hungary’s first king, Stephen I, and is the third largest church in all of Hungary. The church is one of the two tallest buildings in Budapest (equal to the parliament building) and we climbed the 364 stairs to get to the dome. There were some narrow passages, but it was well worth the climb for the gorgeous 360 degree views of the city. 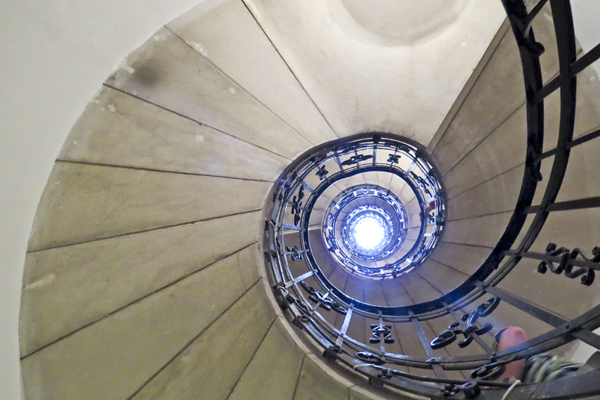 The stairs going up to the top of the dome.

Me and David after climbing the dome. 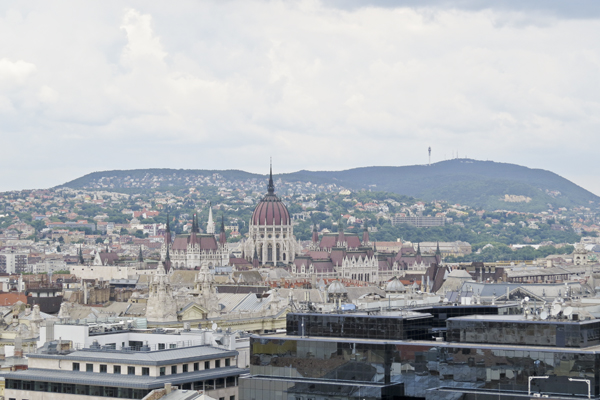 View of the Parliament building from the dome. 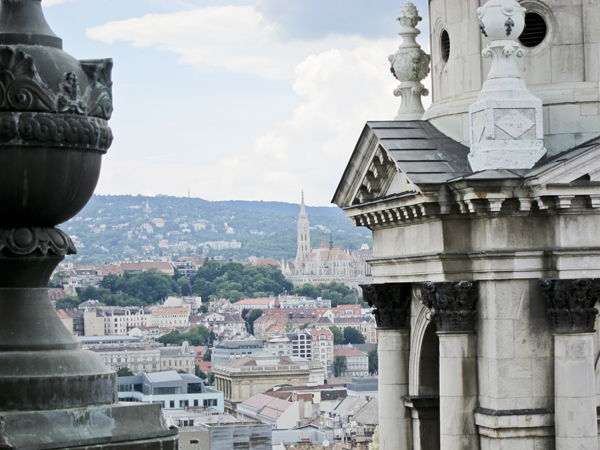 Another view of Budapest from the dome.

The inside of the church is beautiful (most of the European churches I have visited are) and my oldest was blown away by the architecture. He kept saying, “Can you even imagine how long it would take to build all of this?” He was also very intrigued by Saint Steven’s preserved hand which is housed in the church’s reliquary. 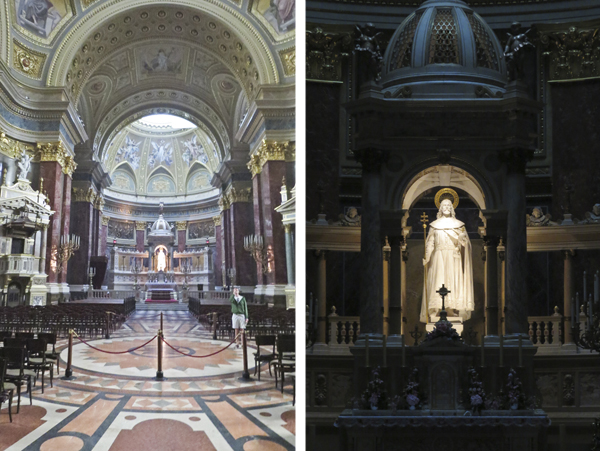 The sanctuary and altar 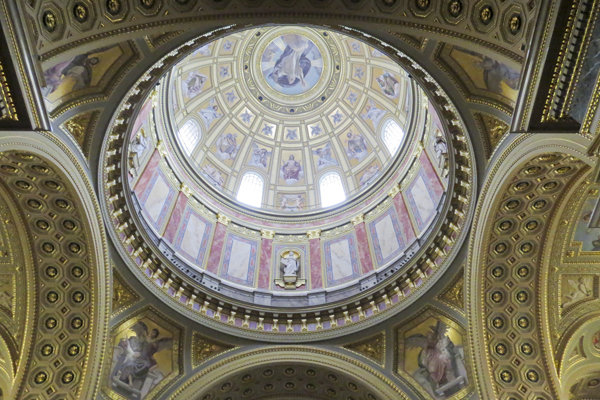 Interior view of the cupola 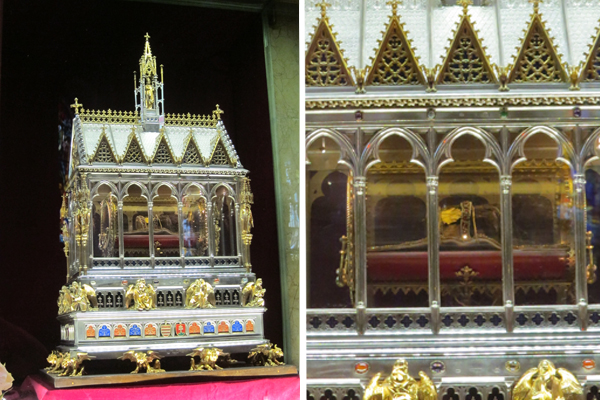 After touring the church, we set off in search of ice cream and David’s cousin took us to not one, but two of his favorite ice cream parlors. The first was a gelato shop located less than a block away from the basilica where they shaped our gelato into roses that we almost too pretty to eat (almost). The other was located close to the Hard Rock Café and Budapest’s famed Váci utca (Váci Street) and they had the best walnut ice cream I have ever tasted. We actually made a trip… or two… back there on our own later in the trip. 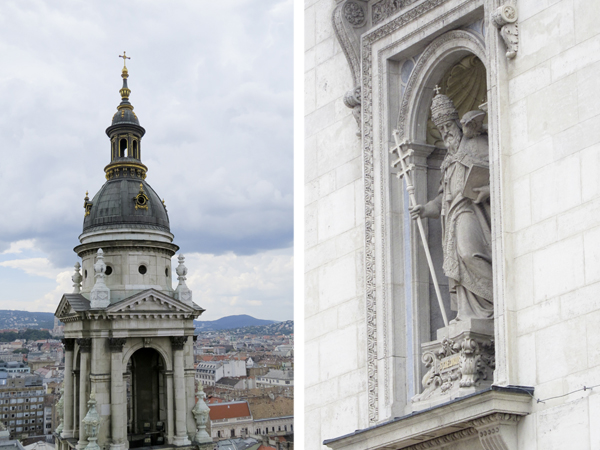 More views from outside of Saint Stephen’s 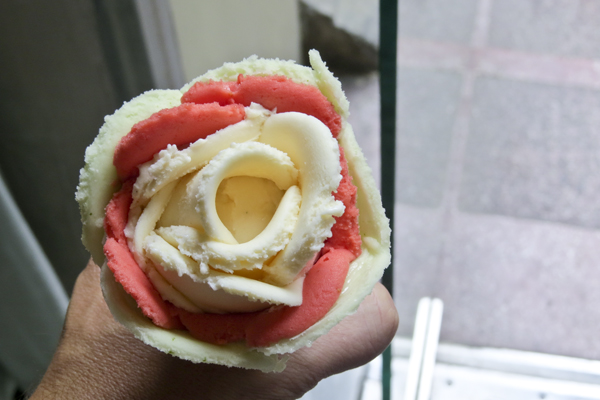 That night we were joined by Dédi who, in true Hungarian fashion, brought a feast of sajtos pogácsa (Hungarian cheese biscuits), fasírt (fried meatballs), and three large Tupperware containers filled with several different kinds of sütemény (Hungarian baked goods) that she had baked just for the trip. I could feel my waistline expanding already!