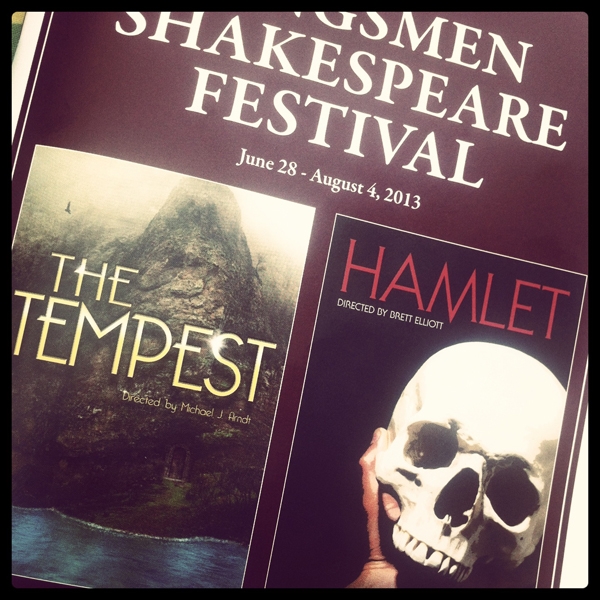 I can remember the exact moment that I fell in love with William Shakespeare. I was fourteen years old and living in Houston, Texas. My dear friend, Maggie, had been enrolled at a Catholic school across town at the beginning of our freshman year in high school, so weekends were our only chance to get together. One weekend, just before Christmas break, and just before I was set to move back to California, Maggie invited me to her school’s winter play. She had to go for school credit, and I wanted to spend as much time as possible with my friend before my impending move, so I agreed to join her. I don’t think I even asked what we were going to see.

The play turned out to be William Shakespeare’s pastoral comedy, As You Like It. From the moment the lights dimmed, I was entranced. From the elaborate sets and costumes to the rhythm of the actors’ speech, everything was captivating. The language seemed foreign at first, but I soon found myself laughing along with the jokes and the allusions. I was in love with Orlando and Rosalind… and Touchstone – I was madly in love with Touchstone! As You Like It also contains one of my all-time favorite Shakespearian quotes: “All the world’s a stage, And all the men and women merely players” (The entire “all the world’s a stage” monologue is absolutely spectacular). By the time the actors made their final curtain call, I knew that I wanted to know everything I could about this Shakespeare fellow. 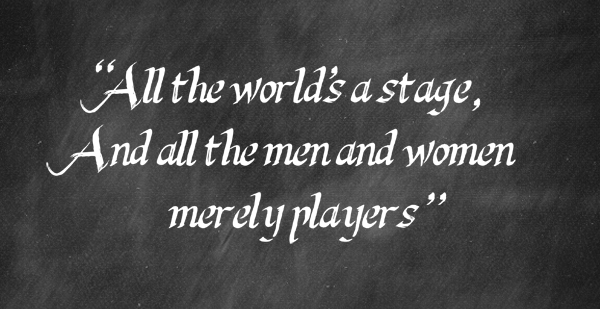 Over the years my love of all things Shakespeare grew. Some plays I had to read for class, but most I read on my own accord. I loved Romeo and Juliet, Macbeth, Julius Caesar, The Taming of the Shrew; but nothing outshone my love for As You Like It. Nothing, that is, until I met a despondent Prince of Denmark. Hamlet took my love of Shakespeare to a whole new level. Part of it was that my twelfth grade English class did a far more in depth study of Hamlet than anything I had ever done before. We had to act out scenes, paraphrase monologues using modern language, and work on a group project using Hamlet as our theme. My group (which was also David’s group) chose to do a Saturday Night Live type sketch show that we called The Shakespeare Comedy Hour. Our teacher said that we each needed to have a five minute presentation and my group (there were four of us) thought that meant that we needed five minutes per person, or a twenty minute video (we were wrong, of course. She had meant that we needed a presentation that was five minutes total – we all got major extra credit points). I don’t know if I’ll ever know for sure if it is the play itself or all of my wonderful memories of studying the play that make Hamlet my favorite Shakespearian play, but I do know that every time I hear or see a reference to Hamlet (or anything else by Shakespeare) it makes me smile.

Fortunately David shares my love of all things Shakespeare. Not too far from where we grew up, California Lutheran University houses the Kingsmen Shakespeare Company, a professional not-for-profit theatre company that produces a Shakespeare Festival each summer. We try to make it there as often as possible and we made a special effort this year because one of the productions was Hamlet. The festival is a magical experience. It takes place outdoors in Kingsman Park, located on the campus of California Lutheran University. There is nothing quite like watching Shakespeare in the park, while having a picnic under the stars. This year we were planning to attend with my cousin Mat (who also carries a torch for the Bard). At the last minute, as we were walking out the door, our eldest son asked if he could come along. We hesitated at first because Hamlet is our favorite play and we weren’t sure if he would be able to make it through the show without getting bored. Eventually we acquiesced. He loved all of the preshow activities – the picnic, the hot chocolate and getting up close and personal with the sets. When it was time for the show to start he took his place on our picnic blanket and turned toward the stage. The actors took their places and I watched both the stage and my little boy.

And then something magical happened. My big guy sat there, absolutely enthralled with the story. He laughed at the witty banter, he gasped at the appearance of the ghost of Hamlet’s father (it was one of the most frightening renditions of the ghost I have ever seen), glared with suspicion at the malevolent king. He jumped up at intermission and asked if it was over. When we said that no, we were only half way through, he pumped his fist and exclaimed, “Yes!” By the time the play was over he was already asking when we could see more of Shakespeare’s plays. I think we have a new partner in crime! I learned that night that it is never too early to introduce your little ones to The Bard. 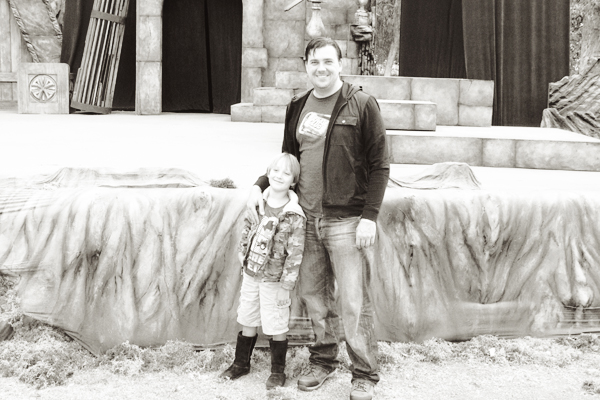 David and Big Guy in front of the stage. 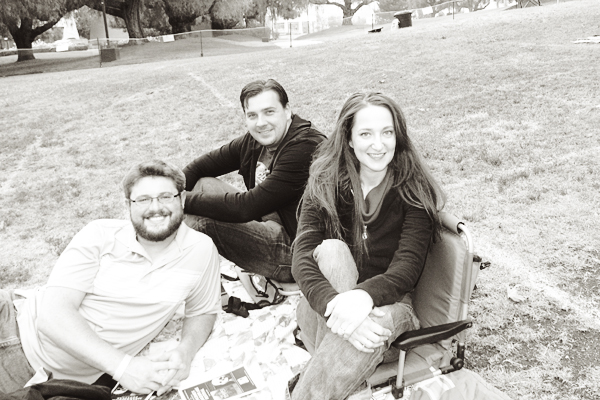 Mat, David and me in our box before the show.

After you’ve read or seen any of Shakespeare’s play performed, you’ll start noticing little references to them everywhere. Can’t get enough of Hamlet? These are just a few films, to get you started:

: This is the closest film version of the play that you can find. If Kenneth Branagh is involved, you can be certain that you’re getting a decent version of Shakespeare and Hamlet is no exception.

: Mel Gibson gives a great performance as the troubled prince of Denmark. This film was more popular among my peers than the Branagh version, but it is heavily edited and it would be ill advised to attempt to take a quiz on Hamlet and base your knowledge on this film alone.

: Okay, while not exactly “based” on Hamlet, this Canadian screwball comedy has a ton of parallels and reference to the play. Any Hamlet enthusiast will love the subtle (and not so subtle) nods to the play.

: Trying to introduce Hamlet to children? Look no further than this Disney favorite. The Lion King

is a great, age appropriate adaptation of Hamlet, but with a much happier ending.

: One of my favorite movies of all time, Renaissance Man

stars Danny DeVito as a man hired by the army to teach a bunch of misfit recruits to think (and not get kicked out of boot camp for being stupid). When the recruits (who include Mark Wahlberg) express an interest in what DeVito is reading (Hamlet), he finds himself teaching them Shakespeare. The recruits all end up smarter and we get a great lesson in how to read Hamlet with big laughs along the way. It’s a win-win.

: This movie is actually based on the work of another famous English writer (That would be Jane Austen’s Emma). However, it has one of my favorite Hamlet references in film. When Cher is riding in the backseat of the car with Josh and his girlfriend, the girlfriend inaccurately attributes the “to thine own self be true” quote to Hamlet. When Cher corrects her, the girlfriend says, “I think I remember Hamlet accurately,” to which Cher retorts, “Well, I remember Mel Gibson accurately, and he didn’t say that. That Polonius guy did.”

: I know, I know… It’s a stretch, but when Billy is doing his final test at the end of the film he recites the famous “to be or not to be speech.” See, even movies made for teenage boys reference Shakespeare!

: This has to be one of my favorite kids’ movies. While based on Shakespeare’s Romeo and Juliet, there are many subtle references to The Bard in general, including a quick reference to Hamlet in the addresses of the Capulet and Montague houses (2B and Not 2B).