This weekend was my soon-to-be-sister-in-law’s bachelorette party. And, let me tell you, we partied. When you leave a dozen women together, totally unsupervised, things go down.

Truth-be-told, it was pretty tame. I mentioned last week that I was going to a spa, and go to a spa we did. We had to get up at the crack of dawn to meet up at 6:30 in the morning so we could make our way to Glen Ivy Spa in Corona, California. The spa opened at 9, so we wanted to be there by 8:30 and thought that a 6:30 departure would get us there in time. Apparently we overestimated our travel time and ended up sitting in the parking lot for quite a while. Even though I was ultra prepared with my lists, I didn’t actually get around to packing the night before which meant that I had to be up before the sun to get ready. And you would think that with my exhaustive lists, I would be sure to have everything that I needed, but you would be wrong. I managed to forget my makeup brushes, yoga pants and my jacket (all of which were on my list). What gives? 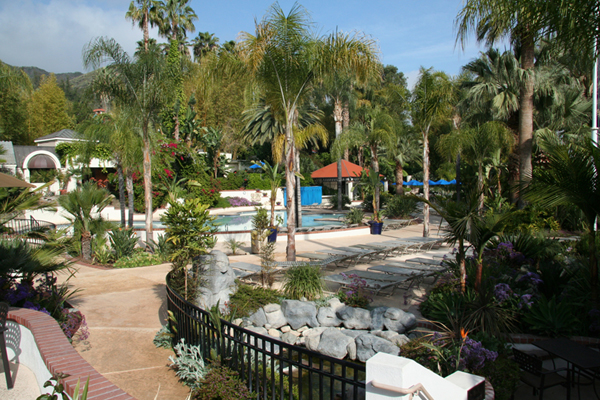 I did, however, remember to bring my sunscreen (and I slathered my SPF 100 on every 30 minutes… I know, excessive… but my unburned skin thanks me). The spa was awesome! I wasn’t totally sure that I was a spa person prior to this weekend, but now I can assure you that I am absolutely one hundred percent a spa person (spa junkie maybe?).  I’m on a mission to get someone to go back with me (and I’m completely open to testing out new spas with people, just saying). Anyway, after a fabulous day of relaxing by the pool and being pampered (who knew that being slathered in mud could be so refreshing?), we all congregated at the home of one of the girls and got ready to go out to dinner (that is when I realized that I didn’t have my makeup brushes or a jacket). We went to a place called Lucille’s, where they had the best ever biscuits with apple cinnamon butter. I could have eaten my weight in those (definitely-not-gluten-free) biscuits. I also had a great barbeque chicken salad. 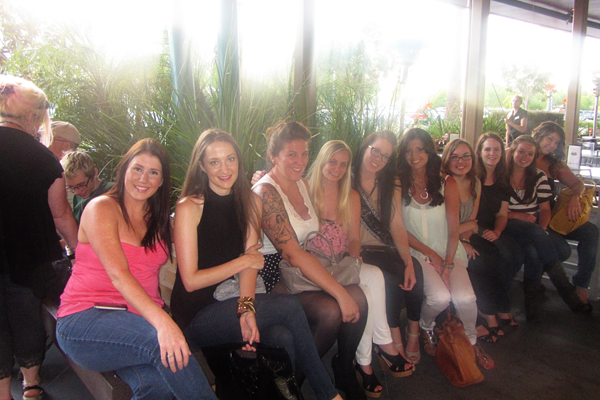 Here is part of our group waiting to be seated at dinner.

One of the best parts of the night was when we got back to the house for a good old fashioned girly sleepover. With everyone in their pajamas, we toasted the bride-to-be and played games well into the night (I think we finally hit the sheets sometime around 2 a.m.). We were told by the hostesses to bring along fifteen one dollar bills, which sounds highly suspicious (like strippers might be involved… but they weren’t… promise). The bills were actually for a totally awesome game that I had never heard of, but that I am now completely in love with.

The game is called LCR

(or LRC, depending on who you ask). It is a dice game in which all players hold three one-dollar bills. Everyone sits in a circle and on your first turn you roll three special dice which will determine what you do with your money.  If it lands on an L, you pass a dollar to the left;  an R will have you pass a dollar to the right; a C means that you put a dollar in the center and a dot means that you hold onto a dollar. If you have three or more dollars in your hand on your turn, you roll all three dice but if you have less than three dollars, you roll one die for each dollar in your hand (two dollars = 2 dice; 1 dollar = 1 die; 0 dollars = 0 die). You keep rolling and passing money until there is only one person with any money. That person then wins all of the money in the center. The game is great for all ages because everything is left completely to chance and because, until there is no money left you are never out of the game as you never know when someone to the left of the right of you might have to pass some bills your way. The game takes absolutely no skill to play (other than knowing the difference between your left and right… which I sort of do) and you can play with as many people as you want.  Trust me, you want this game in your game closet.