So… my computer died a few weeks ago. It was a spontaneous death. It wasn’t brought on by a fall or a spill or a virus. Apparently it died of natural causes even though it was less than a year old.

I’ve been in the middle of some projects at work, so my computer’s death didn’t come at a very good time. David finally had a few spare minutes and was able to get a new one last week. Despite my annoyance at having to install all of my programs and configure all of my settings, I think that I might be in love with this new device. So far, so good.

My iPad had to be replaced too, which means I’m on my third iPad. My first one had a faulty microphone and my second one wouldn’t connect to 3G. When we took it to the Apple store, we were informed that we did so just in time. We only had 11 days left on our warranty. I guess we dodged that bullet!

So, I’m finally back online! I’ve been cooking a lot lately, so I have several great new recipes to share!

Last week was Easter and we (and by we, I mean I) thought that it might be fun to dye our eggs with all natural dyes. I was really excited about it and everyone else acted like they were as well (although certain people, who will remain anonymous, bought back up dye just in case I failed). I searched online for recipes and bought all of my ingredients. There was a lot of boiling and simmering involved. It takes a lot longer than dying with the little tabs you get from the store, but we had a lot of fun. I think we’ll do it again next year. We might even try some more dyes.

This is what we used this year:

I used bowls that were big enough to hold 4 completely submerged eggs. I filled the bowls ¾ full with the liquid (the water from boiling the vegetables for pink, purple, green and blue and boiling water for yellow and orange), added 2 Tablespoons of white vinegar and then stirred in the spices (if they were needed for that color).

The color of the liquid in your bowls is not necessarily the color that the egg will turn. This was most noticeable with the green dye. The dye actually looked like a muddy orange and, for the first several minutes of dying, so did the egg. The longer it sat in the water, though, the more it started to turn green. I was also convinced that the eggs steeping in the red cabbage water were going to be lavender (since the water was a vibrant purple) but they turned out a pretty robin’s egg blue. I was a little disappointed when we took the eggs out of the water after soaking for more than an hour and the colors weren’t as distinctive as I had hoped. They seemed too light but most of them became darker and a bit more vibrant as they dried. They are definitely pastel colors though (which I like for Easter, but if you’re looking for more primary colors, this is not the way to go). The orange was the least successful and I think we’ll try something other than paprika next year. The green and the yellow were my favorites. Next year we’ll have to try some more dyes. I heard that red wine and grape juice yield some pretty interesting results. 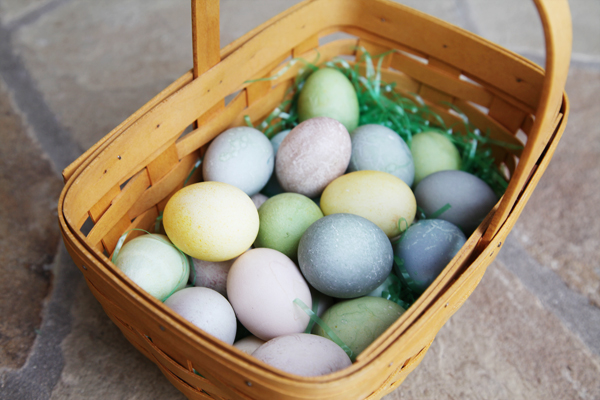 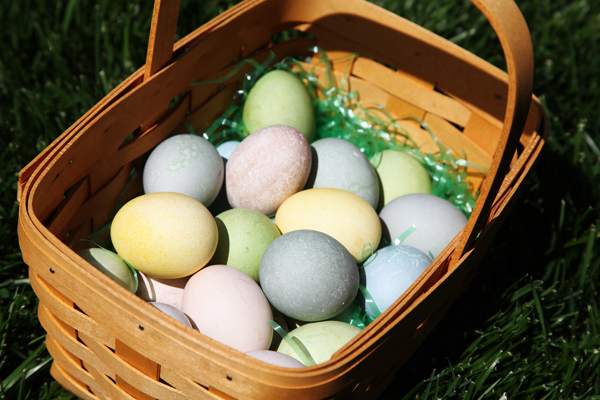