I made seven pies for Thanksgiving this year. SEVEN! Was it overkill? Sure, but I was hosting a huge group of people and I would rather have way too much food than run out. Anyway, I made three pumpkins, an apple, a blueberry, a maple-bourbon pecan and a Nantucket cranberry. The cranberry pie was a last minute thing because I had an oven that was going to be free for a little over an hour and an abundance of leftover cranberries (I bought way too many for my small batch of cranberry sauce). It is one of those recipes that I had wanted to try for a long time but I hadn’t gotten around to it because I never have cranberries.

The Nantucket cranberry pie was the ugly stepchild of the group; not because the pie itself was ugly, but because I made the mistake of calling it a “Nantucket cranberry pie” rather than just a “Nantucket pie.” A soon as people heard the word cranberry, they wrinkled their nose in disgust and moved on to the next dessert. I watched as people tore through the pumpkin pies and the blueberry, the pecan and the apple but my poor little cranberry pie sat there untouched. To be perfectly honest, I was a little afraid to try it. I like cranberries, but I wouldn’t say that I love them. I really wanted to like it because I loved making this pie. It isn’t even a pie in the traditional sense. You don’t roll out dough and you can throw everything together in less than five minutes. Plus, there is so much pectin in cranberries that you don’t have to worry about the pie being runny and overflowing in your oven. It is a win/win.

After our Thanksgiving feast, everyone went home, I finally tried the pie. I’ve never been so happy that people didn’t eat my food. It was A-MA-ZING. And it was all mine (well, and David’s… and I shared some with my parents and children). To say that it was a hit would be putting it mildly. I made another one this weekend for some friends that are staying with my parents.

I got the original recipe from the Pioneer Woman and made some (very minor) tweaks to make it gluten-free. I’m looking forward to trying some variations in the future. It really doesn’t taste like cranberries at all. I would say that this tastes more like a sour cherry dessert. Because David is a big fan of anything with sour cherries (anything meggyes) he loved this.

Adapted from the Pioneer Woman 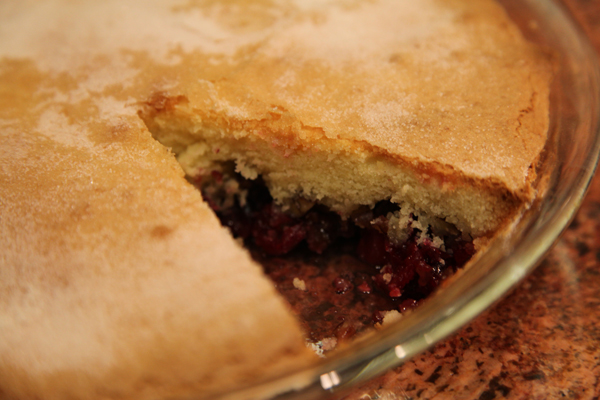 This picture is terrible. I promise, this is so good.