December the 6th is known as Saint Nicholas Day throughout Europe. In Hungary on the night of December 5th, children leave out their freshly shined shoes either on the windowsill or next to the front door for Szent Mikulás (most children simply call him Mikulás). He is Hungary’s Santa Claus figure (Szent Mikulás literally translates to Saint Nicholas, and in Hungary it is Jesus, not Santa, that brings presents on Christmas Eve). If they have been good boys and girls, when they get up in the morning, their shoes are filled with candies, chocolate, walnuts and fruit. If they have been naughty, however, Mikulás doesn’t leave them anything and their shoes are, instead, filled with onions, coal and willow switches by Mikulás’s frightening elf companion, Krampusz.

Mikulás visited our house for the first time when our oldest son was two. The entire family put out our shoes next to the front door and went to bed. When we got up on Szent Mikulás Day (December 6th) our little guy was ecstatic to find his favorite European treats tucked into his shoes (Kinder chocolate, Boci chocolate, etc.). That night, as we were getting ready to go to bed, he started collecting all of our shoes and setting them up next to the door. Try explaining to a two year old that candy isn’t going to magically appear in his shoes every morning.

Our older son’s days of believing in Mikulás (and Santa for that matter) are probably numbered. Just the other day, we had this exchange in our car:

“Mom, why doesn’t Mikulás go to my friends’ houses?”

“Because he is from Hungary and most of your friends aren’t Hungarian.”

He was silent for a long time, so I thought that my answer was sufficient. Then he asked, “Mom, how do you said Mikulás in English?”

Without thinking, I replied, “Nicholas.”

“You’re going to have to ask your dad.”

I have wanted to make a Bûche de Noël (which is just a fancy-schmancy way of saying yule log) for years and I decided that now is as good a time as any. In honor of tomorrow being Saint Nicholas Day, I decided to give it a whirl. I scoured the internet and found a recipe that had a bit of a Hungarian flair. I also did some research on how to roast chestnuts. Special thanks to Smitten Kitchen for her method. David is absolutely in love with everything about this cake. 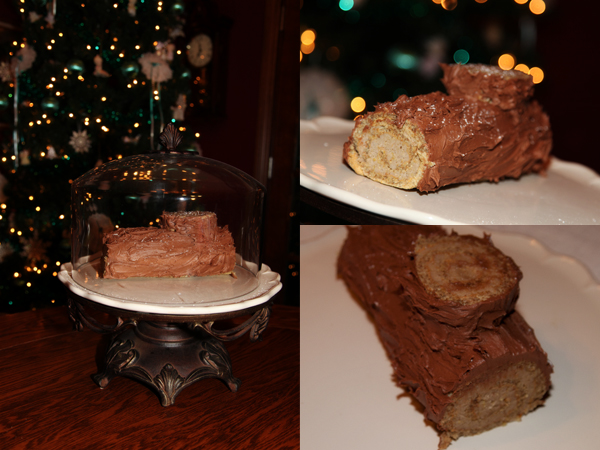 In the meantime, make the chestnut cream filling:

Back to the cake:

To finish the cake: