Each year I plan on adding at least one Christmas CD to my collection. It isn’t a hard quota to meet and I usually far exceed that limit. I know that I could probably just download the music, but there is something about holding a tangible item. It makes my Christmas CDs feel like an early present from Santa. This has been a good year for Christmas albums and have a feeling that I’ll be adding a few more before the season is over (hello! Can you say Glee: The Music, The Christmas Album Volume 2

?). I have had these on heavy rotation in my car since the beginning of November. Don’t judge, Home Depot started playing Christmas Music before Halloween.

– I want you to imagine a mixture of Dean Martin and Frank Sinatra. Can you hear it? Now mix in a little Perry Como, a dash of Johnny Mathis and a pinch of Bing Crosby. Pure heaven! That is exactly what this CD is; heaven. He sings beautiful Christmas standards the way that they were meant to be sung. You won’t have trouble singing along in your car because he doesn’t change up the arrangement in an attempt to put his own stamp on the songs like so many other musicians. I was interested to hear his take on Santa Baby, fearing that it might be overly silly, but he manages to pull it off beautifully aside from one line, “Come and trim my Christmas tree with some decorations bought at Mercedes.” Really? Mercedes? Tiffany has stuff for guys too! Honestly, I would buy any CD by this Canadian cutie. This one is definitely a buy.

– The cover should have tipped me off. Doesn’t it just look like it belongs in an Urban Outfitters. If it was bigger it would fit right in with my parent’s collection of vinyl. In all honesty, I thought I would like this more than I do. It isn’t that I don’t like it. I do. I really do. I think that I’m just way too obsessed with Zooey Deschanel’s singing in Elf

and I was expecting something a little different. You know when you build something up in your head so much and then it isn’t quite what you expected and it’s kind of a letdown? I guess next time I should preview before I preorder. This isn’t bad, not by any stretch of the imagination. It is just different. It has a very hipster vibe. If you’re in the mood for some Christmas tunes and you want something that sounds a little like Patsy Cline, then this is the holiday CD for you. Is this my all-time favorite Christmas CD? No. Would I still buy the CD again, knowing what I do now? Probably. 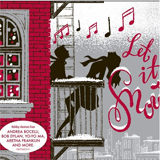 3. Starbucks: Let it Snow – I anxiously await the new Starbucks Christmas CD every November. I was so excited when David surprised me with this one before Thanksgiving. I wasn’t sure that anything would be able to compete with last  year’s album, but they pulled it off smashingly with this year’s Let it Snow. I was surprised to find that Death Cab for Cutie’s rendition of Christmas (Baby Please Come Home) is quickly becoming one of my all-time favorite Christmas songs. The song is usually very upbeat but this version is slow and it has an almost melancholy sound. I could drive around with this song on repeat for hours (and I have). The CD features and all-star cast with the likes of Bob Dylan, Andrea Bocelli, Neil Diamond, Yo-Yo Ma, Dolly Parton. Alison Krauss, Brenda Lee, Duke Ellington, Elvis Presley (not doing Blue Christmas for a Change), Bing Crosby, the Ronettes and more. It would be a great background CD or a Christmas cocktail party.