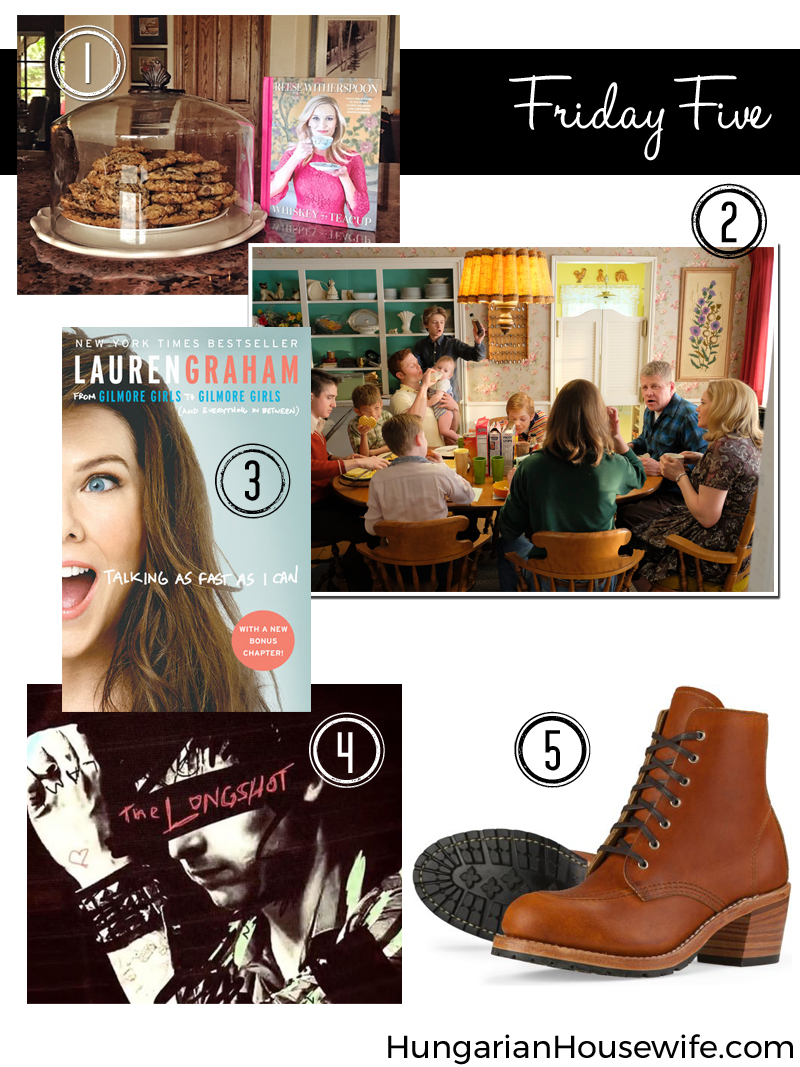 It’s Friday, so that means that it is time for Friday Five! I can’t believe the weekend is upon us, or that I’ve waited until the last minute to go to the pumpkin patch (yet again) and now we’re going to have to deal with super crowds this weekend since it is the last weekend before Halloween. Alas, when will I ever learn? Hope you’re enjoying your Friday! Here are my Friday Five for this week:

1. Eating: I have two words for you: Cowboy Cookies. Oh my gosh! Where have these been all my life? I didn’t know these were a think until I read Reese Witherspoon’s book, Whiskey in a Teacup. After googling, I found out that this is apparently something that people have known about for a long time. Witherspoon’s recipe is a fun take on this (apparently) classic cookie – with the addition of Rice Krispies that take the cookies to a whole new level. I know I posted about these cookies on Instagram a while ago, but I am seriously obsessed. These may just be the best cookies I have ever had.

2. Watching: The Kids Are Alright – Imagine ten people living in a house with three bedrooms and only one bathroom. Now imagine that these ten people are comprised of a mother, a father and eight boys ranging in age from one to twenty. Hilarity is bound to ensue and dues in this ensemble comedy staring Michael Cudlitz (of The Walking Dead, Southland and Grosse Pointe Blank, to name a few) and Mary McCormack (of Mystery Alaska – one of my all-time favorite movies, Deep Impact and In Plain Sight). Set in the 1970’s the story follows Mike and Peggy Cleary and the rest of their traditional Irish-Catholic brood as they navigate the changing times in working-class Los Angeles. It is reminiscent of The Wonder Years and A Christmas Story and I think has major potential. I am really hoping that this sticks around for a long time. The Kids Are Alright airs Tuesdays at 8:30/7:30 central on ABC.

3. Reading: I have been on a reading kick lately and I currently have about six books going at the same time. I’ve always loved biographies and memoirs and I recently finished Lauren Graham’s Talking as Fast as I can. As you may have already ascertained, I am a huge Gilmore Girl’s fan, so I absolutely loved the parts of the book where she looked back on the making of the original show and the Netflix revival Gilmore Girl’s A Year in the Life. It also has some fantastic stories from her childhood, starting out as an actor and then various highlights from her career (including the time she spent on Parenthood – another favorite). It also touches on love and relationships. I greatly enjoyed her writing style which reads like an old friend telling a story over coffee. Lauren’s novel, Someday, Someday, Maybe was also a fun read.

4. Listening: My oldest son is in a band and has been broadening my musical horizons. Lately he has been blasting a lot of 90s alternative rock which led him to discover The Longshot, a side project of Green Day’s lead singer Billy Joe Armstrong. The band’s first release was Love is For Losers and it is super mellow yet catchy at the same time. If you like some of Green Day’s slower songs, this song is totally for you. I’m seriously hooked. Check out the video on YouTube.

5. Wearing: I should actually label this section “waiting to wear” because they are sitting in my closet just waiting for a day that is cool enough to throw them on. While the rest of the country is enjoying sweater weather, in Southern California our temperatures are still reaching the high 80s and 90s. When I can finally wear sweaters and boots again, I will be wearing these Red Wing Heritage Clara boots (style 3404) in heavy rotation. I have had these for almost a year (they were a Christmas present last year – David’s parents have a Red Wing franchise so we have a lot of Red Wing boots) and while they take little while to break in, once they conform to your feet they will feel like they were custom made just for you. Red Wing Heritage boots are not cheap, but they are made in the USA and they will last forever (especially since they can be resoled).