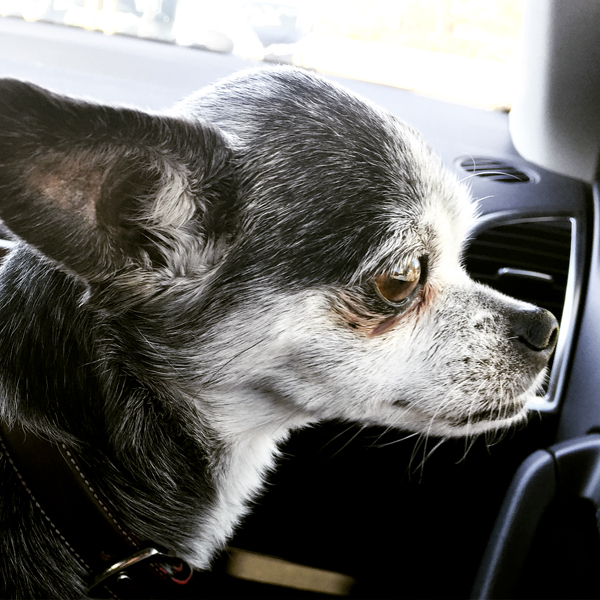 Solo before being dropped off on Friday

Last week was a bit more stressful than normal so when we went to church yesterday and the sermon was titled “The Stressed Heart” I started to wonder if my pastor had been spying on me.

Of course, there were the usual stresses of work and the kids’ school and the added strain of having several design projects culminating at the same time and the impending arrival (hopefully) of new equipment that we need to fit into an already cramped workroom. Those were all stresses I could handle. I can schedule out the design projects so overlaps are minimal and I like rearranging things in the workroom every now and then to make things more efficient. There was another stress, however, that felt more immediate at upsetting.

The main source of my anxiety in the last week was my dog, Solo, and more specifically his health. We took him into the vet for a routine exam and discovered that they needed to do a biopsy on a lump he has on his back. Of course, immediately my mind went to the worst. He’s eleven years old and everyone is always commenting on how peppy he is for a senior dog. I think deep down, I was waiting for the ball to drop. Then as the vet looked him over she said that he needed some dental work, which I had sort of suspected because his breath was unusually bad the last few weeks. This shouldn’t have upset me and it really shouldn’t have been a cause of anxiety, but it was. Dental work meant that they needed to put him under and that’s when I really started to panic.

He has had his teeth cleaned several times, so being put under wasn’t anything new but this time it felt different. The last time he was in for anything routine, which at that time was vaccinations, he nearly died. I’m not being dramatic when I say that. He had an extremely severe reaction and had to have two blood transfusions. I could feel my heart pounding and my ears started to burn. I knew these were early signs of an impending panic attack, but with David’s comforting support and yoga breathing, I was able to ward off the attack.

Once we got to the car it was a different story though. I was in all out panic mode. What if? What if? What if? I had a hard time even putting all of my what ifs into words. What if they pull his teeth and his tongue sticks out? What if he has a bad reaction to the medicine? What if his biopsy comes back and it is cancer? What if the absolute worst happens? I couldn’t even bring myself to say out loud what the absolute worst was. David knew exactly what I was thinking but he remained calm. He’s an eternal optimist not unlike Sonny (Dev Patel) in The Best Exotic Marigold Hotel who says, “Everything will be all right in the end… if it’s not all right then it’s not yet the end.” David kept reassuring me that everything would be fine.

We took him in on Friday and I did my best to keep myself busy to avoid excess worry. The vet told us she would call around three o’clock and if everything went well we could probably pick him up around five thirty. When David’s phone rang just after lunch, my heart sank. I was sure that something was wrong. David listened intently and it was impossible to read his expression. Finally he smiled and said, “That’s great news, we’ll be there.” I exhaled deeply feeling like I had taken my first real breath in days. He was waking up from his dental work, which went great, and the lab results came back and that suspicious lump was just a fatty deposit under the skin. Everything was fine. All the worry had been for nothing. The reason the vet was calling so early was that Solo is apparently a champ and he was done way ahead of schedule. When we went to pick him up from the vet, all of the veterinary assistants were raving about how sweet he was and how much they loved him. He was a bit dopey for the rest of the afternoon and he has to take medication and eat special food for the next couple of weeks (he did have to have some extractions but the good news is that his tongue is still perfectly contained in his mouth). I had worried for nothing. He’s even one of those weird dogs who have no problem taking their disgusting antibiotics (seriously you can put anything on his food and he will still eat it).

Anyway, at church on Sunday the pastor’s sermon reiterated that all of my worry had been for nothing. The sermon’s message focused on two verses from Philippians that say, “Do not be anxious about anything, but in every situation, by prayer and petition, with thanksgiving, present your requests to God. And the peace of God, which transcends all understanding, will guard your hearts and your minds in Christ Jesus.” (Philippians 4:6-7). This week’s goal is to meditate on those verses and start worrying less.